I will start off with the usual assessment of fitness prior to the race. Training had gone ok during the first few months of the year with lots (and lots) of miles logged, I’ve flirted with (but not totally committed to) to an interval session once a week which helped see slight improvements in Marathon & Half Marathon times. However, it’s fair to say I have been drifting through training weeks, I’m definitely not at my leanest weight, haven’t done any core work and generally haven’t been quite ‘on it’ if I’m honest. Unfortunately I did pick up a cold 2 weeks out which wiped me out for a few days and took me a good week to recover but this coincided with the taper period so no big deal. This meant I had a nice rest although strangely my legs never really felt ‘fresh’ at all despite not running much in the last week.

Therefore a fair summary of my fitness was good but not great and so no excuses for the race really.

A week or so before the race Stouty upped the stakes with a further motivational challenge which involved me trying to go well under 18 hrs. This was in all honesty going to be a little out of reach but the stakes were high on his part (mention of a new tattoo) and I was just risking a stupid, broken, faded, worn out hat whose retirement was long overdue. Aswell as the motivation, I enjoy the pre-race banter so it’s all fair game.

For the first time in a while I also had a friend crewing (Running Reborn’s Shane Benzie) and a couple of guys (Alex Whearity and Paul Beechey) who were going to take it in turns to pace me during the second half of the race.

The weather was looking pretty good as I exchanged greetings to a few friends at the start of the race who were running and supporting and after James Elsons race briefing we were off.

With an aggressive goal in mind, I lined up near the front for a quick start (i.e. not to get caught in the queue of people through the first gate) and ran the first part of the route chatting with Jez Isaacs as Craig Holgate disappeared off in the distance.

There was a small group of us running near each other as we passed the first Aid Station at Walton on Thames. Leila Rose insisted that I take one of her cheese scones and I duly obliged before carrying on. The plan was to minimise the time spent at each Aid Station to a quick in/out with a few snacks and no more than a minute or two at most if I could help it.

I dropped off the group for an impromptu pit-stop at the Weir Hotel Pub along the river who were kind enough to let me use the toilet (which was a relief) after which I then continued on.

The next phase of the race saw some fairly solid running along the Thames passing the Aid Stations at Wraysbury, Dorney, Cookham and Hurley. The weather was very changeable ranging from good sunshine at first to intermittent showers to hail at one point. Yes, ‘The Hat’ was doing me proud with one last hurrah.

There were a few stop/start moments during this phase when I must have put my rain jacket on and then taken it off several times with each potential downpour. I was keen to avoid getting my upper torso wet going into a cold night and then getting a chill or stopping to change kit so thought this a prudent measure but it was a pain going through the jacket on/jacket off Daniel san routine.

I got to the Henley Checkpoint (51 miles) in just under 8 hours (6pm) having run pretty much most of the way. I met the crew there grabbed a few snacks and marched off with Alex (Pacer 1) in tow before picking up a jog.

Alex was good company and we chatted for a bit as we started the leg to Reading and then settled into a head down and keep plodding on mode for periods. We passed the club coach Arthur who kindly grabbed this photo and plodded on towards Whitchurch. 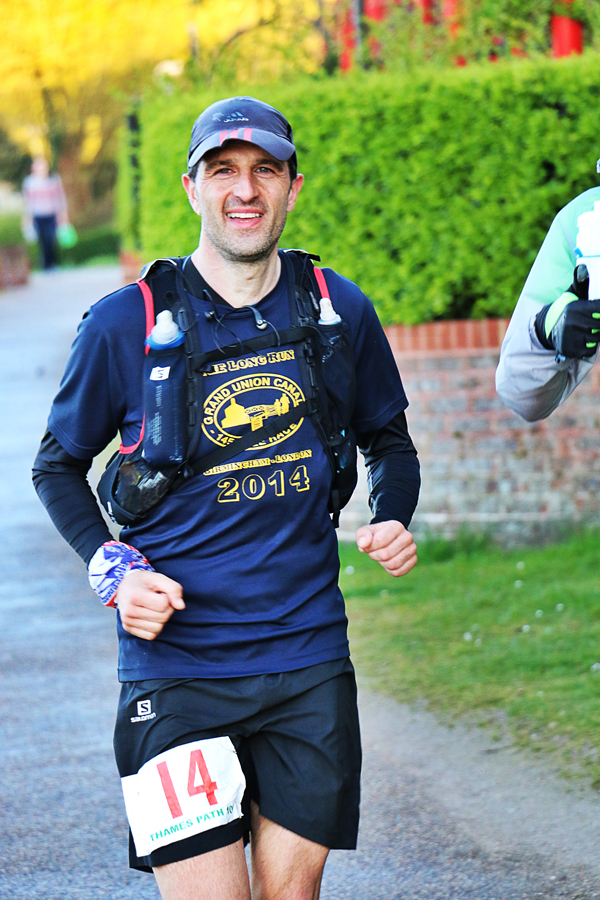 After the Reading CP. (Photograph by Arthur Abbot)

My Garmin had ran out of juice by now (I had the map mode on with the 2014 route as a reminder of which bridges to cross in the first half of the race which used a lot of power) and I used a portable power charger and left it in my pack to charge up again with the intention of putting it back on to track my progress. I hadn’t realised that the Garmin 920XT wouldn’t charge and track at the same time (unless it switched itself off as it was jostling around in my pack?) so this was a futile effort.

This section was a run/walk effort with more running than walking but we continued to make reasonable progress arriving at Streatley (71 miles) in just under 12 hours.

Here, I switched pacers with Alex heading home and Paul Beechey taking over for the remainder of the race. It was dark by this point and I had already added one layer and then added a second layer and an extra pair of gloves to keep myself warm being conscious that the pace was slowing.

Alex had warned my he would be ‘Good Cop’ and Paul would be ‘Bad Cop’ but that wasn’t to be as Paul was rather nice about the whole pacing effort and spent the time gently cajoling me into running a bit more.

Overall, the gentle plod was punctuated with lots and lots (and lots) of short walking breaks. There was the usual stiffness in the legs and shortening of the stride, I also had a few sleepy moments but not as bad as I normally do (Yes Paul, I’ve been much worse!).

Aside from a time check at Wallingford, I was pretty oblivious of the time and said to Paul that I was happy to keep chipping away with the run/walk effort as we made our way off the streets and through the misty fields and riverbanks. He glanced at his watch a lot which wasn’t a good sign..

The ground conditions had been fairly good but it was a little muddy towards the latter stages and I had been wearing road shoes so had the occasional slip and aswell as the odd stumble on an exposed tree route. Thankfully my pace was never fast so a full face-plant was never on the cards. The weather was cold and misty and I was grateful for the four layers of clothing I was wearing as my overall was pace was slowing with the run/walk effort (or lack thereof). The mist was pretty dense and spooky along the dark river banks at some point it was thick meaning visibility was down to a couple of feet with the head torch being reflected back towards you at times.

Aid Station stops were reasonably brief with no more than a couple of minutes for a warm drink and a few biscuits and we left Shane (the driver) to just drive ahead and get a bit of sleep if he could. My energy levels were a little up and down and Paul suggested a couple of gels which I took which I can’t say really helped that much.

I saw a few people around and a couple of people passed me, not that I could have done much or was too worried about it as I could only run what I could and if someone was stronger on the finish then fair play to them.

For the last few miles it was probably more walk/run than run/walk and once again I struggled to keep a sustained run going for the entire race and am pretty disappointed with myself. Sure, the legs were stiff and sore, I was tired and perhaps lacking a bit of energy but I genuinely feel this was more of a mental than a physical lapse. If anyone has any tips on maintaining motivation… answers on a postcode please to Mr Demotivated, Reading, Berkshire please. During one of our quieter moments, I planned my running retirement again… never a good sign.

We passed through the last Aid Station without really stopping (hello Naomi) and then plodded out the last couple of miles. It was good to see Dave Cox having a storming run and finish towards the end as he trotted out passed me with a mile to go. Actually, I hadn’t realised it was Dave until after the race.

I started to see the first traces of light as I finished and with the slow last quarter deep down I realised I had failed my goal without much of a fight. I had to finish in complete darkness to have any sort of shout and as we spied the finish I mustered one last plod and crossed the line. The person doing the timing said “18.43, well done”.

I could try and gloss over the negative points by highlighting this was a Personal Best time (by a marginal 15 mins) and I finished 13th out of 297 starters (207 finishers) but the result was not what I wanted. There was some sense of relief at finally finishing and being able to sit down but no elation whatsoever. I’m not sure why I’m so disappointed, for a hobbyist completer (rather than competer) it’s not a bad result but I’m missing some drive, motivation and determination during the latter stages of a race and this is my honest opinion of how I feel.

Despite being a bit disappointed with the effort, it was time for a few thanks to the marshals and a quick photo at the end (putting on the best smile I could muster) and I then headed off for a cup of tea, bacon sarnie and a shower.

I must offer huge thanks to Shane, Alex and Paul for being an awesome crew and keeping me company overnight. Your efforts to keep me plodding were very much appreciated.

After showering and changing, I headed home for some much needed sleep. It’s fair to say that my legs felt worse than usual and I struggled to basically get up off the floor on the Sunday! Therefore it’s a planned week of limited exercise and some time to start thinking about my ‘big’ event of the year, Challenge Running’s inaugural Monarchs Way, 615 miles to be covered in 14 days.

What the TP100 has reminded me about is ‘self management’ during a race. If I try and batter out a 100-150 miles of the Monarchs Way in one go then I’m going to struggle with the rest (or drop as there was no way I could walk after the TP100) so this will likely be a more cautious approach (although it would be good to get 1 day ahead of the cut-offs in case you have a bad day). With limited support, self-navigation and kit and equipment to be carried I think I’m likely to be out there for the duration so mentally its going to be really tough moving day after day.

However, that is exactly the challenge I signed up for and I’m also raising money for a good cause if anyone is interested in making a donation to a worth cause. You can check out the link here

I’ve almost forgotten ‘The Hat’ bet. Despite Stouty offering a double or quits, this will be winging it’s way in the post to him shortly to do with what he pleases. A bet’s a bet as they say and I’m not taking the easy option so if you managed to read your way through this morose tale then there’s at least some silver lining for you that Centurion events should experience better weather in the future.