It’s been quite some time since I’ve written a race report having taken some time out after Spartathlon last year. So what have I been up to? Well, not much to be honest, there was a period of rest at the back end of last year followed by a period of running starting in the new year.

The first few months of the year were a little hit and miss (two steps forward and one step back) with the niggles not really settling but as the months progressed I settled into a regular volume of running to a point where I ran the local 50km (Reading Round Ultra) in July and then managed to add a few more longer runs through the summer as the 2 year piriformis issue eventually settled and the legs (knees) got into runnable shape.

With some fitness (but not necessarily good training) I had a place at Mark Cockbain Track 100 which seemed like a good opportunity to see whether the body would stand up to a long run (cut to chase, not really) in an ‘easy’ 100 mile event. I tried not to place too many expectations on myself as I was a bit out of practice. 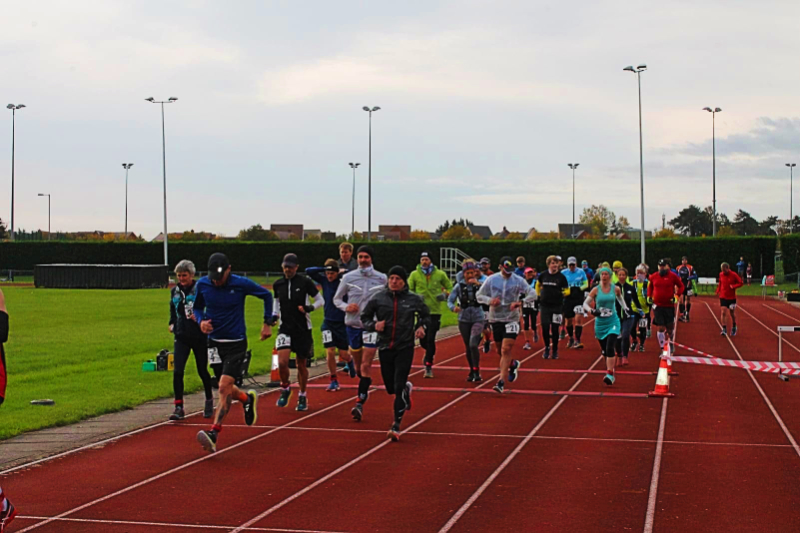 To be honest with heavy rain predicted in the evening/overnight I wasn’t totally looking forward to the event and the motivation is not quite there yet. There were about 50 runners and the race was pretty much self-supported (no crews) due to COVID restrictions. I brought all my own food and drink which was placed in a large plastic box by the side of the track. I managed to both over-pack and make a couple of last minute panic buys (waterproof shorts and mitts) so I felt like a total rookie but did eventually use every single of piece of kit I took with me.. so I will claim this as good insight from many years of experience.. perhaps.

We set off at 10am for the first of 403 laps. My watch has a good lap counter feature which I set to keep track of the number of laps completed (and not rely on slightly inaccurate Garmin distance which came out about 4-5 miles over 100 miles) and so I had planned to break this race into 20 lap segments with a drink/snack after each block. I probably set off too quickly at a pace I would have run when fitter but not one I could really sustain now and after getting past 25-30 miles (my longest run in the last year was 50km) started to hit a bit of a wall and the pace slowed. 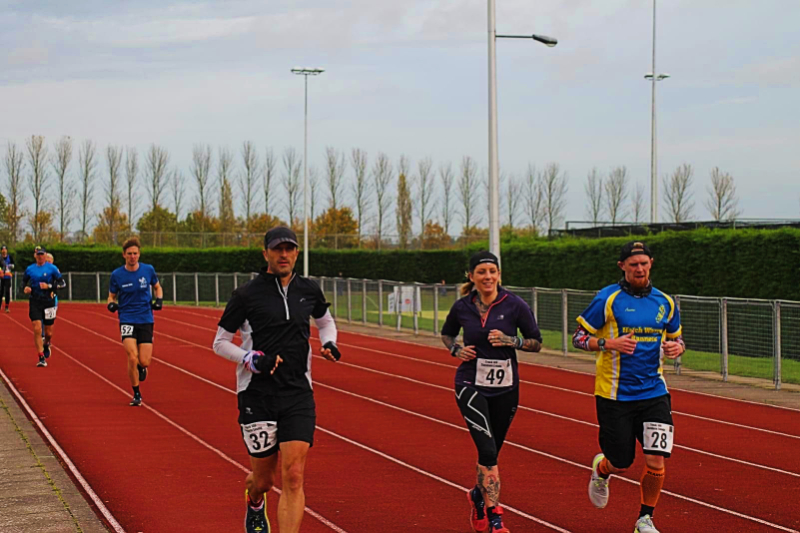 With no headphones allowed due to the need to be aware of other runners it was lap after lap of my own thoughts or brief conversation with other runners. The marathon split was 3.52, 50km was 4.40 and slowing and the 50 mile split was 8.5hrs so slow and despite not having an expectations, I was starting to take more than a few walk breaks and feeling a bit despondent. 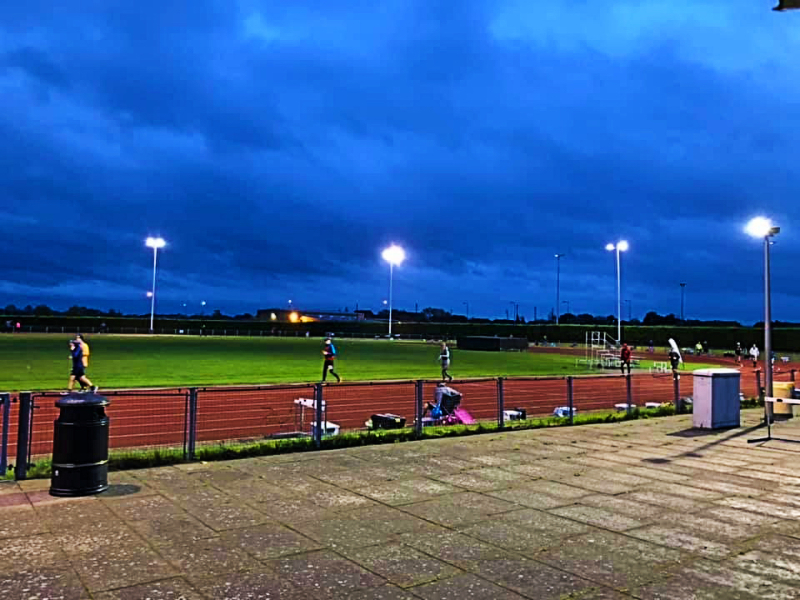 Day turned to evening as the natural light faded and darkness settled in. We had a few showers during the day but not quite enough to change to waterproofs but sometime during the evening the rain hit for a few hours on and off with varying degrees of intensity. Not much fun.

This wiped out a few runners who decided to bail at this point and head home. I was half-tempted to join them to be honest as I was pretty much death-marching the second half of the race with (in order of impact) a lack of effort/motivation, a slightly swollen knee, a lack of proper race fitness and long runs. I tried to put a brave face on it and carry on marching but wasn’t really enjoying it and once again questioned my appetite for long distance running. I nearly retired again (5th time and counting) during race. I can’t believe the rain gods are still punishing me after all my years of torture running in the rain. I’m so lucky I even managed to bring a cyclone to Sparta one year. 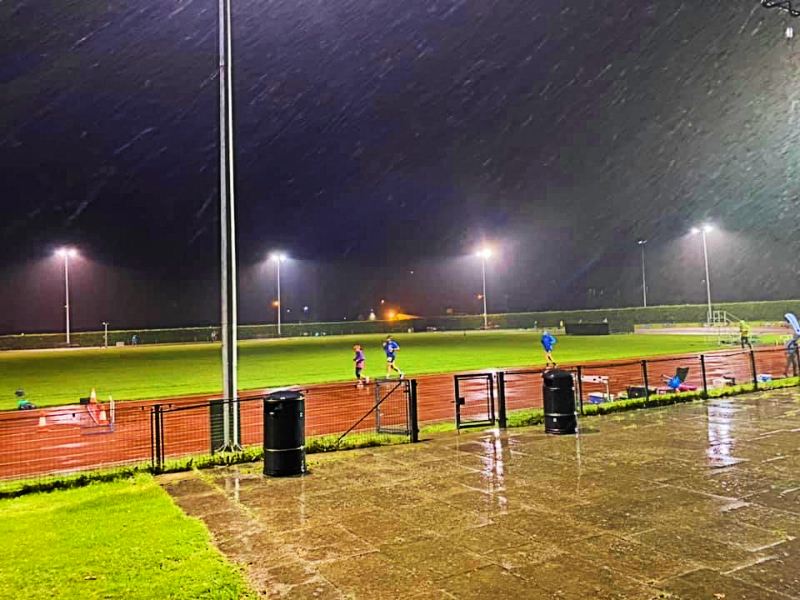 The rain continued as I marched relentlessly onwards. I hit the wall around 75 miles when I needed a major reset to keep going as I was feeling pretty cold, tired and wet (waterproofs were being worn but hadn’t bothered with the waterproof trousers so feet were wet and blisters were forming. Hello blisters, welcome back old friend. I’ve not really missed you at all). With the marshalls permission I left the track and went back to my car to grab some spare clothes and spent about half an hour trying to get dry, changed and warm and re-appeared in full ‘death march’ gear for the last 25 mile walk. 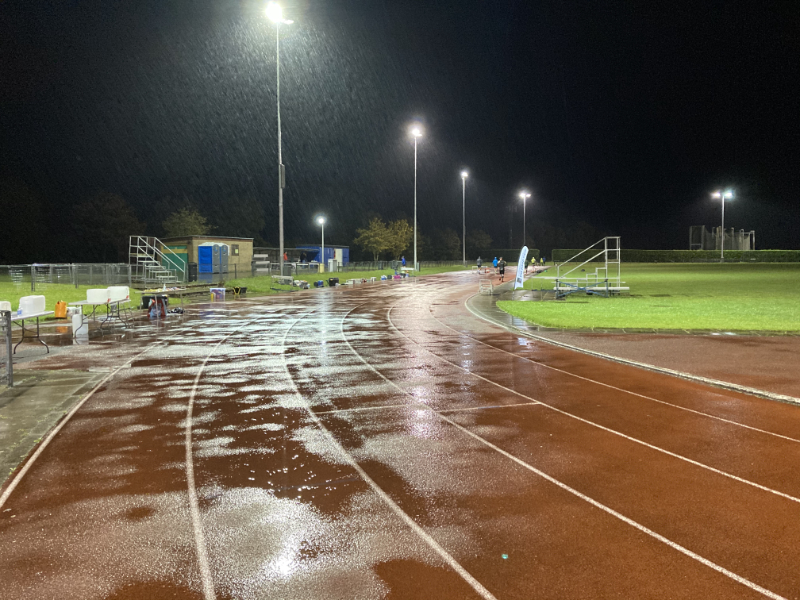 I thought I’d be ok when I got past 300 laps as I would be counting down but alas it wasn’t much fun at all but at least the rain had stopped by this point. My stomach wasn’t 100% as I wasn’t eating a huge amount and everything I drank when straight through me cue about 40 trips to the porta-loo.

I think I convinced myself I couldn’t run as things hurt and walking was the easiest option to get to the end which was bit of a cop-out but I marched on just two get to the end. The 400 metre loops of the track now seemed much longer than at the start of the race. 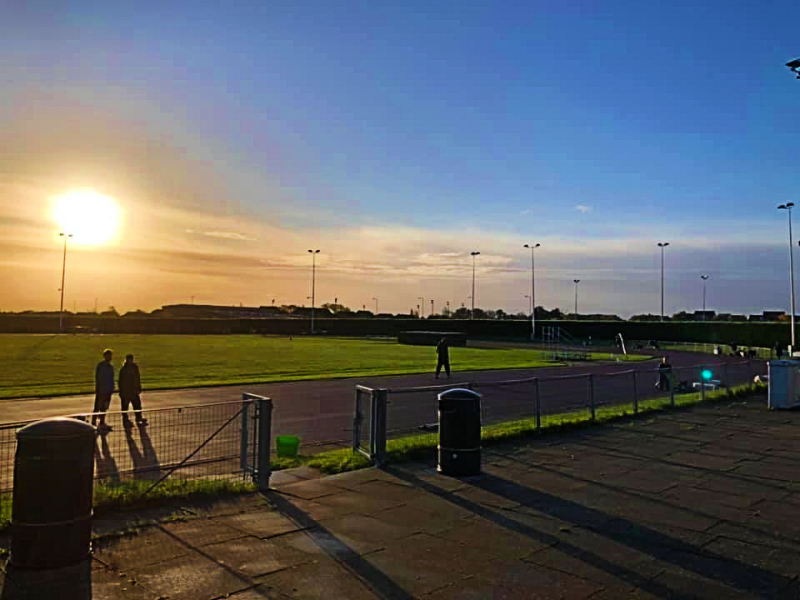 Finally, about 22-23 hours later I made it to the end and after a bit of a kip in the car went home dejected. A week or so later, the swelling on my right knee and feet have gone down but I’m not quite up to running yet and quite enjoying not running at the moment.

In terms of a test as to whether my body can manage long runs, the jury is still out and mentally I’ve not really got the desire back yet and without the right motivation it’s a massive uphill battle to enjoy events. I’m not really sure why I’m punishing myself mentally over races, I should just retire (again).

Thanks to Mark for hosting the event and all the volunteers (Matt, Karen, Riccardo etc) and for use of the pictures. 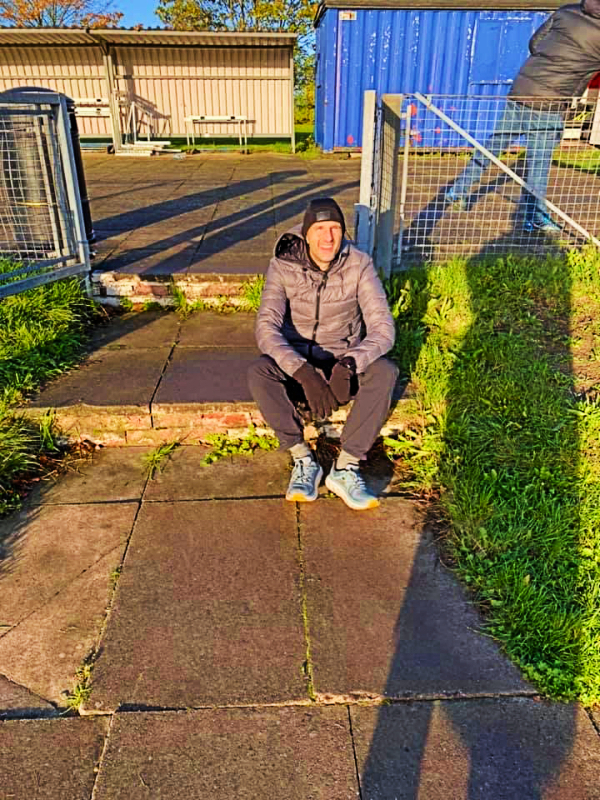