One more run then….

I was in two minds about running this event at all with illness, a touch of runners post race depression and a general lack of any motivation to go and run (I haven’t run much since Sparta and hadn’t gone longer than 10 miles). However, with a few days to go before the race the lure of reaching my 10th Thames Trot finish was an attraction I couldn’t quite shake and I decided to turn up and see the race out.

The change of the traditional Thames Trot event from February to October last year hasn’t seemed to make much difference to the conditions which were still wet, windy and muddy but perhaps not as cold. The immediate forecast before the day was rain all day.. one more run. just get it done.

I’m not going to present a detailed report about a race I’ve run loads of times before. There was the usual first mile dash to get over the lock bridge, a decent path for a short section before splashing through a wet field and muddy path over the lock near Abingdon and onto Checkpoint 1 and everything feeling ok so far.

Between Checkpoint 1 & 2 my long-standing piriformis issues started to rear its ugly head with that usual discomfort and slight pain that starts radiating down the top of the hamstrings resulting in a shortening of the stride and slowing of the pace to try and make the running more comfortable. To be fair, since Sparta I have slacked off the daily rehab here and it really showed today. 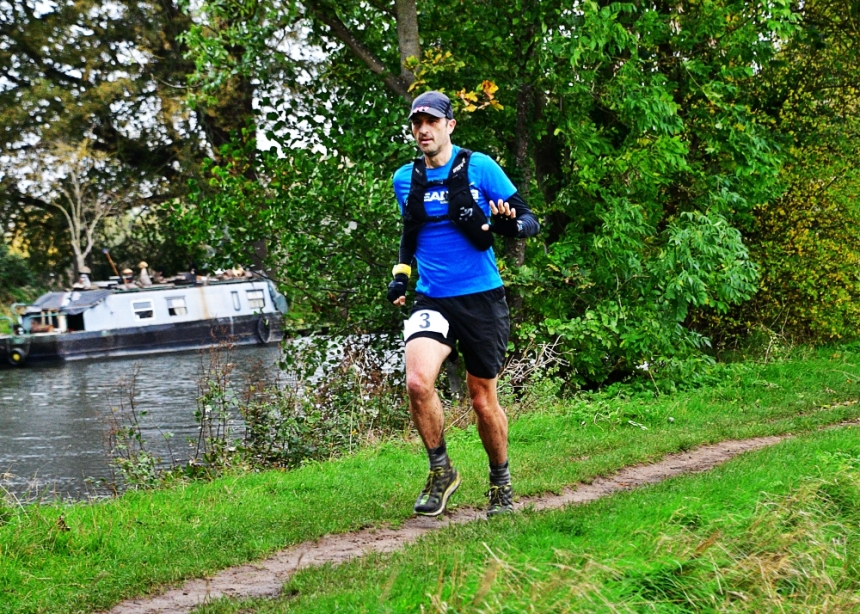 I followed a string of runners to Checkpoint 2 at Benson, topped up my water and carried on towards towards the third Checkpoint at the Swan. We had actually been fairly fortunate with the rain at this point which had held off for a few hours before it started to rain, not heavily but it was incessant for the remainder of the race.

I was starting to struggle a little physically resulting in a few short walks before arriving at the Checkpoint 3. The next few miles out of Streatley away from the Thames Path and along Whitchurch were my slowest. I was struggling to run due to the piriformis/hamstring issue and jog/marched a few miles trying to stretch my legs out towards Whitchurch. The rain was started to feel a little heavier and as I wasn’t properly running I put my rain jacket on to avoid getting too cold.

I managed to get back to a bit of an on/off shuffle but my legs weren’t feeling great. Mentally and stamina wise, I had sufficient willing and fitness to run this but my body was letting me down and it was little miserable and soured the mood. ‘Just get it done and you can have a break’ I said to myself.

We passed Checkpoint 4 and I walked another section up the short hill before trying to get my shuffle going again as we headed through Reading towards Sonning and the last Checkpoint.

A few people passed me as I trudged along the pathways through Reading and the most runnable section of the path. I must admit to getting a little inwardly irritated to some completely well meaning ‘keep going mate’ comments as people passed me as I blamed my body for letting me down and not my attitude (on this occasion).

Not too far after the last Checkpoint I bumped into ‘random Steve’ who was also on a bit of a run/walk approach at this point of the race and we decided to see the remainder of the race out-together. It was an interesting contrast with Steve running his second ever ultra and looking forward to gaining more experience and doing more running in the future (i.e. on an upward trend) and me having run lots of races, feeling jaded, body letting me down (i.e. on a downward trend). One running career starts as another one seems to be grinding to a halt.

We trudged through the last few miles with a bit of peer pressure keeping each other going. With a couple of miles to go, the rain started to pour down quite heavily. Having removed my rain jacket earlier I couldn’t be bothered putting it back on at this point and was completely soaked as we arrived at Henley, crossed the bridge and covered the last mile to the finish at the Bandstand in a time of 8.03.

It wasn’t a disastrous time (I did that in the T50 earlier this year) but practicality this was my slowest Thames Trot finish in several years and no excuses about the conditions as it’s always, windy and muddy! Downward trend and all that..

Thanks to Simon and the ‘new’ GoBeyond team for hosting the event, which was organised to the same good standard as previous events hosted by Steve Adams. It was nice to finally reach 10 x Thames Trot finishes after missing both events last year due to injury and illness. This is the race I’ve completed the most times (closely followed by GUCR x8).

For me, whilst finishing Spartathlon was the public ‘event’ finish before a long break. Struggling through a muddy, wet, windy Thames Trot even brings my running full circle to a grass roots level where I started (although when I first ran the Thames Trot I would be dreaming about an 8 hour finish!)

Running wise, I don’t want to run events when I feel constrained due to physical injuries/niggles/limitations or until I’ve got my motivation back (Lost: Some motivation, if found please return to Paul) so I won’t be participating in events for the foreseeable future until I’ve had a nice long break (semi-retirement/retirement/believe what you will).