The Oxford Ultra is hosted by Ultrarunning Ltd and is one of the 4 “Thames Path Challenge” events which sees competitors complete a 4 stage race from the source of the Thames to the Thames Barrier. The event is open to those completing the full challenge or as individual races on each day.

I had run the first two days last year as back to back training runs. This year, a nice long steady run in a low-key event suited my training plan although I just entered day 2 this time around which was a 60 mile run from west of Oxford to Henley.

The idea of running the Thames Trot +12 miles route on a lovely sunny day in August appealed to me having spent many years running this in the snow/wind/mud/rain in February each year. I was foiled in my attempt last year as it poured down in the morning but was hoping this didn’t happen again (spoiler.. it did).

Thanks to Adrian for dropping me off at the start, we enjoyed a miserable drive through the rain on the way to the race start at the Ferryman Inn, a few miles west of Oxford. As we arrived we saw a few runners already departing and then found out these were the remaining 3 (out of 11) people who started the full 4 day challenge and they had given them an early start to give them a better chance of keeping ahead of the cut-offs. 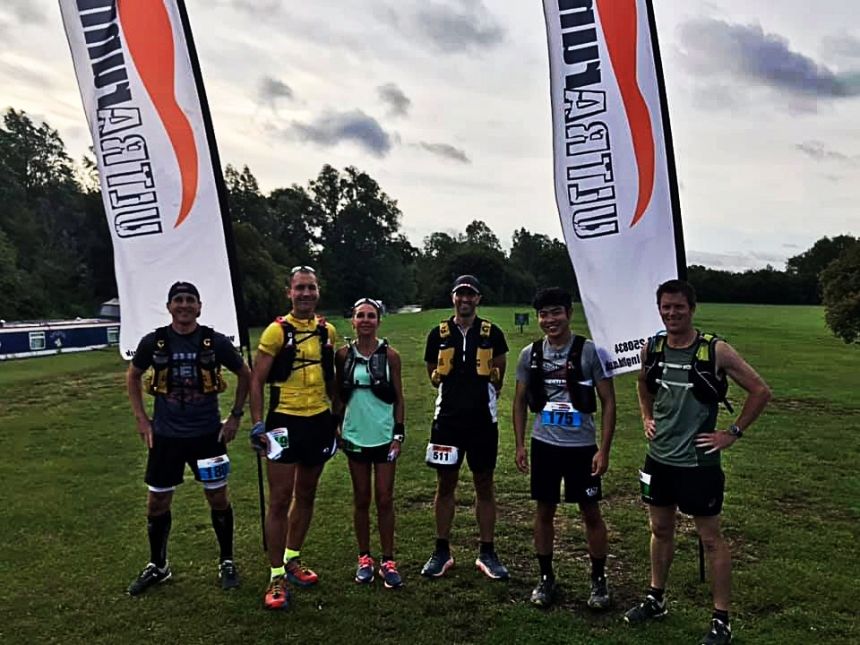 The ‘day trippers’ (Photo thanks to Ultrarunning Ltd)

There were about 6 of us ‘day trippers’ (making 9 in total) who were participating as single day entries and we readied our kit for the 8am start. The weather forecast for the day was ok in the morning and poor in the afternoon with heavy thunderstorms and showers predicted and so I was prepared with waterproofs for the downpour later.. to be honest this put a bit of a dampener on the planned run but not much I could do but get on with it.

This was the part of the course that I was least familiar with but I had my handheld GPS device with me which meant navigation was not an issue and I started to recognise parts of the course from the previous year so no issues whatsoever. As the course headed into Oxford and along the river it became very straightforward to follow.

The weather started to brighten which was a bonus and around the 8-10 mile mark I had caught up with the 3 remaining challenge runners before arriving at the first checkpoint, grabbing a sandwich, topped up the drink and pressed on. 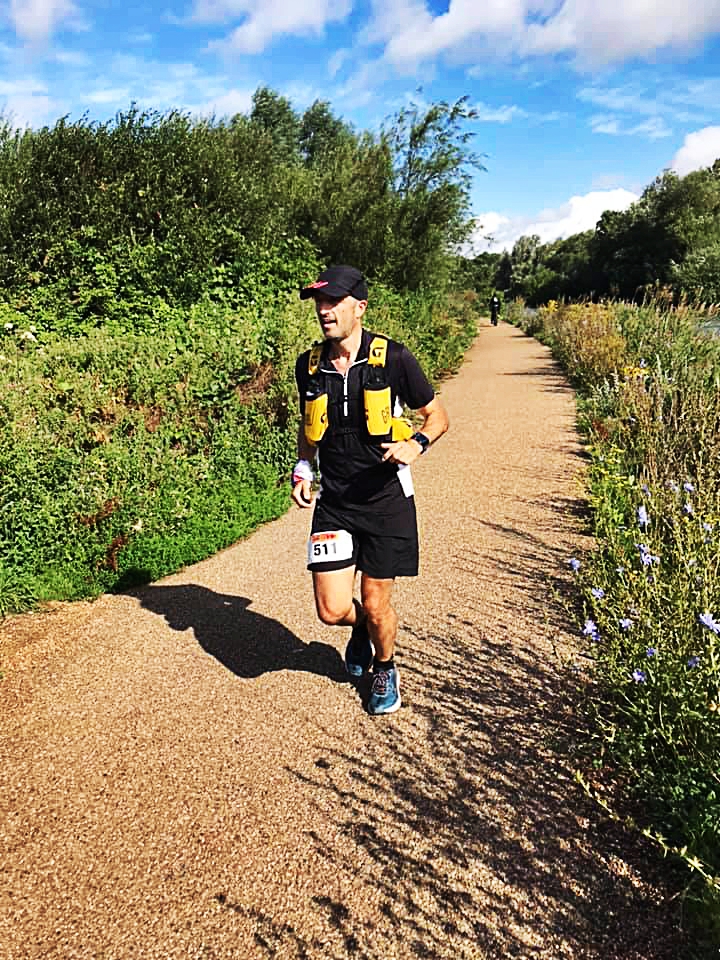 Arriving at CP1 (Photo thanks to Ultrarunning Ltd)

Topping up supplies at CP1 (Photo thanks to Ultrarunning Ltd)

The weather warmed up a lot and it felt really humid and I was going through my water supplies at a much faster rate than normal so started to ration this a bit.

We were now on the Thames Trot route for the remainder of the race which was very familiar to me so didn’t have to worry about navigation at all and could just try and enjoy the running.

My legs weren’t quite feeling 100% fresh after a bit of an effort at last weekends 50km run and so I continued at a steady pace. A bit of tiredness in the legs, coupled with the humidity and soaked feet meant I wasn’t feeling as comfortable as I should have been 12-24 miles into a run.

Annoyingly, the taping on my toes (I was trying out hapla band tape) was coming loose due to my feet being completely soaked due to the wet ground and some of the tape had started slipping off and just after the Abingdon lock crossing I had to stop for a few minutes and stripped all the taping off. With the benefit of hindsight I probably should have worn waterproof socks today.

I paused at the checkpoint here and decided to change socks to a dry pair I had been carrying as a back up and put a bit of rock tape on my feet where I had felt a hot-spot. I drank quite a bit here and ate a few more jam sandwiches before moving onto the next stage.

My feet felt a bit more comfortable with a fresh pair of socks and it felt like this leg was a little more comfortable than the last one. With each leg ranging between 10-12 miles, I settled into a routine of running half the leg and then eating one of my snacks at the half-way point and then running the second half which seemed to break the leg up nicely.

It may have showered on and off a couple of times on this leg and there were a couple of times when I went through the jacket on/jacket off routine trying to second guess when the rain would be a quick (and cooling) shower and when it would end up being heavier.

It was still feeling very humid as I arrived at the Moulsford CP and drank a litre or two of fluids and ate some more snacks.

Arriving at CP3 (Photo thanks to Ultrarunning Ltd)

So far we had escaped the so called bad weather but this soon changed as the clouds darkened ahead and it started to rain more heavily eventually turning into a torrential downpour for a period of time. My feet were once again soaked and having not really dried out since the start of the day I could feel some blisters on my toes and a larger blister (where the skin on your feet creases up) on my left foot which was starting to feel uncomfortable.

I thought I could grab a few moments of respite at Mapledurham Lock where there is a small cafe and had been promising myself and ice cold can of coke and ice cream (regardless of the weather) but found this closed at 3.30pm on a Friday afternoon, most disappointing.

The rain didn’t let up for a while as I came back onto the Thames Path just after the Roebuck Pub found the Thames had burst its banks and had to wade through a section of water. It was pretty miserable around this time.. this was not what I had really signed up for. A sunny run along the Thames this was not.

The weather settled down after this checkpoint and it was back to T-shirt weather. My feet were really sore now and I plodded this last section past Reading Town Centre, over Sonning Bridge and following the footpath towards Henley.

Adrian popped up towards the end to see me just by Shiplake and I plodded the last couple of miles. My left foot was in some pain with the blisters with that ‘wave of pain’ feeling when you put your foot down each stride so I was running a section and then taking a few short walk breaks almost every mile at the end to manage the discomfort.. ouch, ouch ouch.

I arrived at the finish covering the 60 miles in a shade over 10 hours, 2nd runner to finish on the day out of only 6 finishers with 3 DNFs. 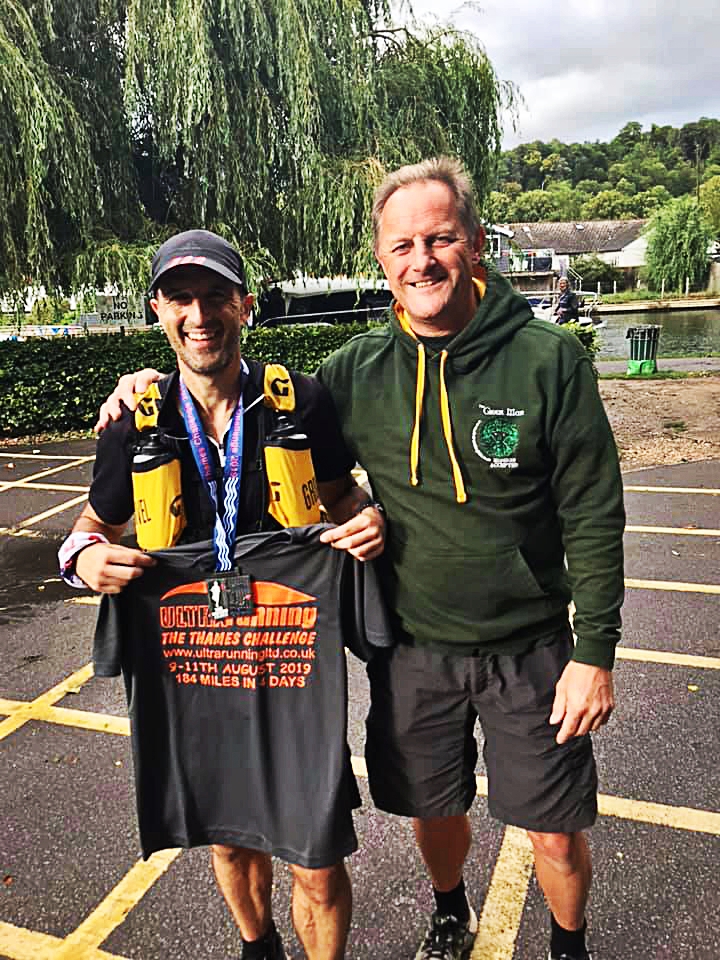 Thanks to Steve and team for once again hosting the event (and standing out in the rain for a lot of the day). It couldn’t have been that much fun for the volunteers aswell as the runners.

Well done to the handful of runners who finished especially to the last 2 runners who were aiming to complete all 4 days of the challenge.

From my perspective, the run was designed to be a nice steady training run and it was good to bank a few miles but the weather made it a lot more miserable than I really wanted it to be and my feet did end up getting trashed which impacted the running over the next few days (a lot of padding was required just to be able to job a bit a few days later).

With the benefit of hindsight, water proof socks would have helped prevent the skin underneath my feet becoming macerated causing the blister. The tape I used (hapla band) is only effective for dry conditions although a bonus is that the tape is quite light and thin. My little toes also got trashed (as usual) and I think wearing a toe caps are probably the most effective method for protecting these. Blisters eh… still writing about these years later despite my best efforts. If anyone does truly design some blister-proof socks then I am the perfect test subject.. Drymax.. anyone? 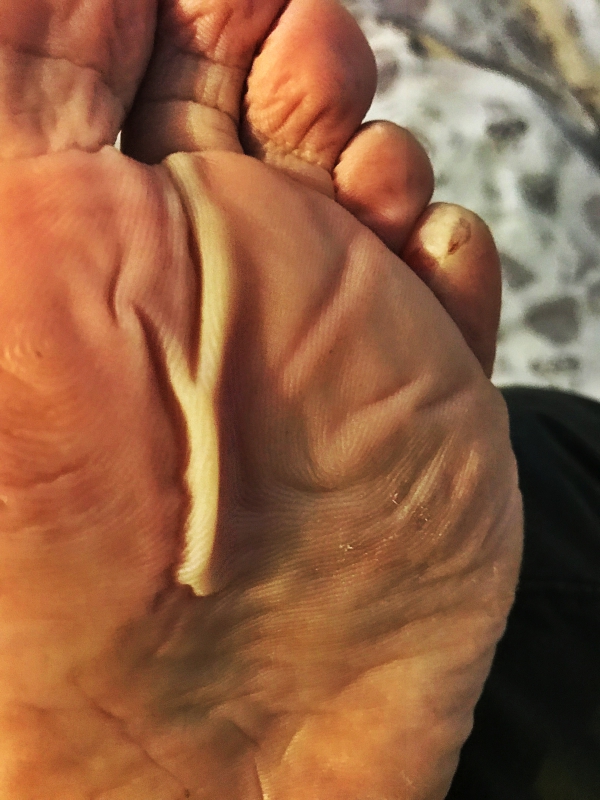