The Round Reading Ultra marathon is a 50km multi terrain race around the town of Reading, it’s basically my home-town ultra (if you exclude Endure 24 close by, Thames Path 100 close by, Thames Trot close by… ah what am I talking about). This was the 3rd running of the event and I’ve not participated in previous years due to running and helping out at the KACR race. 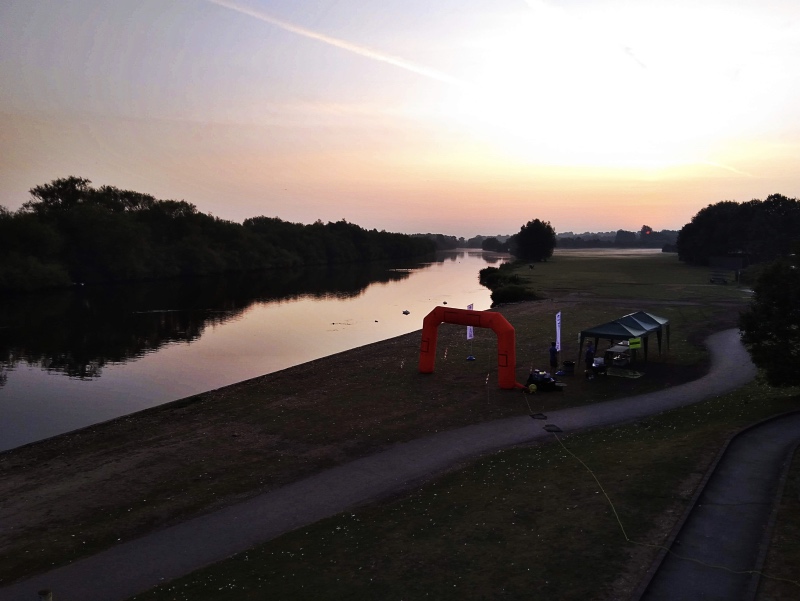 With a change of date, I had an opportunity to run this and I was looking for a few warm up events as I work my way back to fitness in anticipation of Spartathlon in less than 2 months and this was ideal.

I took the opportunity to recce the route the week before and ran the entire 50km loop at a steady pace (approx 4.45 with a short break for lunch in the middle). To be honest, I found the route a bit fiddly in places and there were a couple of horribly overgrown sections which did wonders for my legs (see photo of lacerations below).

Paul vs Thorns (I lost).

Thankfully, the route was updated the day or two before to avoid these sections. I did put the route on my GPS device but on the day, the course was very well marked with signs at every turn so limited opportunity to go astray. Having recce’d the route and being local, I probably would have been ok but you just had to keep an eye out from odd footpaths which you could miss if you put your head down for a few seconds. 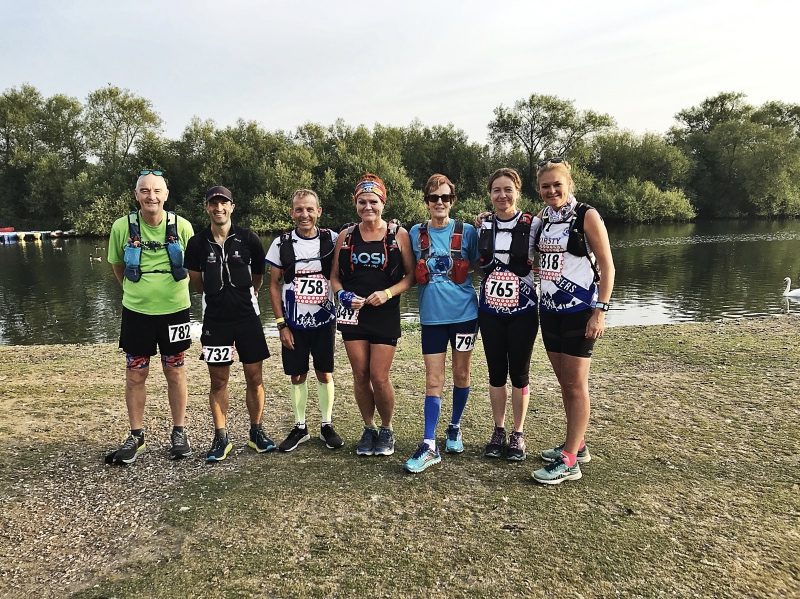 Pictured with the Reading Joggers (Photo Courtesy of the RRUM Team)

The race started at 7am on the Saturday morning at the Wokingham Waterside centre and the weather was looking to be warm and sunny. Despite this being an ultra, it’s not really that much further than a marathon and I was determined to try and “run it” rather than “plod it.” The kit requirements seemed a little over-kill for the distance but rules are rules and I was equipped with water, rain jacket, space blanket etc. The race had checkpoints every 10k or so and the opportunity for competitors to leave a small drop bag and snack at each one, so I labelled up some drinks and a snack at each one so I could grab my own supplies quickly and move on.

After a thorough race briefing, we set off along the Thames Path towards Tilehurst. About half a dozen runners shot off pretty quickly with me trailing them but most of these were out of sight by the first Checkpoint run by Reading Jogger stalwarts Dave & Nicky Sayer where I grabbed my drink and snack and moved on. There were two runners close behind me and I continued on through the streets of Purley and then into the Sulham Woods area before heading past Little Heath School and down towards Calcot.

The race actually ran about 200 metres from my house so Sal and Annabelle popped out to say hello but only 10 miles into the race and it wasn’t really an opportunity to stay and chat and so I pressed on through my estate and eventually followed the route onto the KACR and onto checkpoint 2 at Fobney Lock.

Running past my house nearly (Photo courtesy of Annabelle Ali)

Arriving at CP2 (Photo courtesy of the RRUM team)

A quick stop for a drink and snack and I was off around the Madjeski Stadium and still holding a good but not quite fast marathon pace (need to get some speed back to be honest). Thankfully, the first overgrown section was avoided and it was up and over the motorway junction bridges and out towards Three Mile Cross and Shinfield where we avoid the second (and worst) overgrown section. I usually save my headphones (where permitted) for the second half of the race or when I’m out by myself as a bit of motivation but didn’t event think about needing them today and just carried on.

At this point I realised I hadn’t actually seen anyone in the race since the first Checkpoint but I pressed on, the legs still holding together. There was an additional unmanned water station around here but I bypassed this and headed to the next Checkpoint towards Sindlesham where I paused briefly for some fresh oranges and a drink before pushing on.

The route goes through Lower Early and then past the cinema and into Woodley and follows a nice path towards Charvil and the final Checkpoint. I finally saw another runner for the first time in ages who was having a breather at the aid station where Alex Whearity was also waiting to see myself (his first choice) then his wife Wendy (second choice) and the rest of the Reading Joggers who were running. Alex commented that I was looking pretty good as he jogged a couple of hundred yards with me before heading back to see the others and support at the aid station.

Looking at the watch, with a few miles to go I was looking at a 4 hour’ish time but it was going to be nip and tuck to get under 4 hours. I gulped down a gel and final dregs of water and pushed on and managed trim off a few seconds on each of the last few miles as I headed towards Sonning and back onto the Thames Path literally bumping into a work colleague out for a walk with his wife.

Back on the Thames Path and it was a straight road home and a little push to ensure I came in under 4. I was very familiar with this section and mentally calculating how far the end was and thinking this will come in a little short on my Garmin so I thought I had a minute to spare. A few minutes later I was on the final field and headed to the end finishing in 3.57. Not bad, not bad at all. A few minutes shy of a personal best but with a few twists and turns and CP stops then it was a pretty decent effort. My Garmin (however accurate it was) showed the distance at 30.8 miles, so if it had been a third of a mile longer than the sub 4 would have been much closer.

I was the 6th finisher out of 130 or so runners and managed to collect the 1st veteran prize thanks to Colin Seymour (fellow Vet) picking up the overall win in a time of 3.39. I’ve seen Colin out running loads along the Thames Path and this was the first time we’ve spoken and it was good to have a brief chat after the race where I congratulated him on the win and recalled the tale of when I tried to smash one of his strava segments and failed miserably!

With a 7am start, I was done by 11am. With only a handful of finishers around I headed home and showered, had lunch and was in bed having an afternoon nap (it was an early morning) by 12’ish with my weekend run done.. every weekend should be like this.

Thanks to the Reading Round Ultra team for a very well organised event and well done to all the runners and finishers. The multi-terrain route does cover some nice areas of trail but also does include a couple of road crossings and suburban sections and it did feel strange running in a race around my home estate. However, the route markings and organisation was excellent and the event was supported by friendly marshals with a good atmosphere and as a local runner. This was an event I would be happy to run again.

So a rare occurrence, a race I was pretty happy with throughout.. enjoy it (until the next one).