This was my third year of participating in the QE Spring Marathon, a hilly trail run around Queen Elizabeth Country Park and hosted by Second Wind Running and my first marathon event since London in April 2018.

I’m still working my way back towards fitness and have recently started a rehab programme to help address ongoing knee and piriformis issues. Running wise you could say I’ve been ‘running’ but not ‘training’ so this was going to be a benchmark test against previous years where I’ve managed 3.36.24 (2018) and 3.31 (2017).

I travelled down to the race with my running buddy Alex Whearity who must have felt left out with all my tales of injury woe during the car journey as he kept mentioning he was a ‘bit under the weather’ and ‘would see how it goes’ and then about 30 seconds before the start of the race lined up at the front and asked Phil the RD what the course record was… classic sandbagging. You have learnt well. 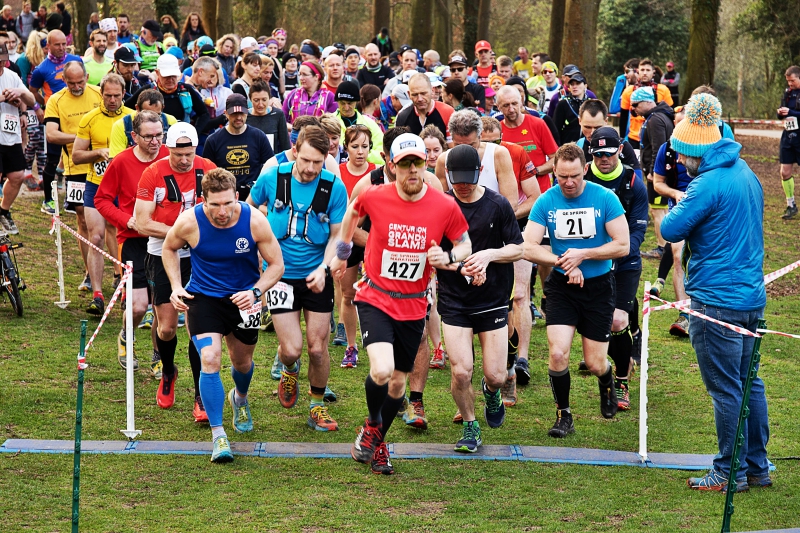 Alex leading from the front (Photo by Gloriosa Photography)

We registered, saw a couple of familiar faces and lined up for the start. I settled in around the front quarter of runners as we set off up the first couple of hills and people traded places before a line of runners spread out.

Conditions were pretty much perfect, a little cool at the start but ok when you had warmed up. The recent good weather meant the ground conditions were excellent with no mud. It was probably the best conditions we have had for the three times I have run the event.

The run itself is comprised on 2 x 13.1 mile loops with a half marathon event also taking part around the same time. My first loop was generally steady, I did hike a few hill sections but tried to keep some momentum going on the flat and downhill sections. I dropped back a few places on people on this lap but overall this lap was ok.

And we’re off (Photo by Gloriosa Photography)

I started the second lap with a bit of a hike up the first hill before getting going again and once again tried to run the flat and downhill sections a bit harder to make up for lost time. This was the longest effort run I have completed in many.. many months and I could sense the effort level increasing as I tried to maintain some pace.

As we headed into the last quarter of the race, whilst I was starting to feel a little jaded I could spot a few runners ahead which was a good incentive to keep going to see if I could make up a position or two. I could feel my piriformis pulling and poked it a few times as I was running just to see if it would ease off for a little while (it didn’t).

Mentally, the last few miles went quite well. I felt as if I was finishing strongly and overtook a few runners during the last couple of miles. The pressure of overtaking a runner meant you had to keep pushing a bit for fear of them catching you up again! 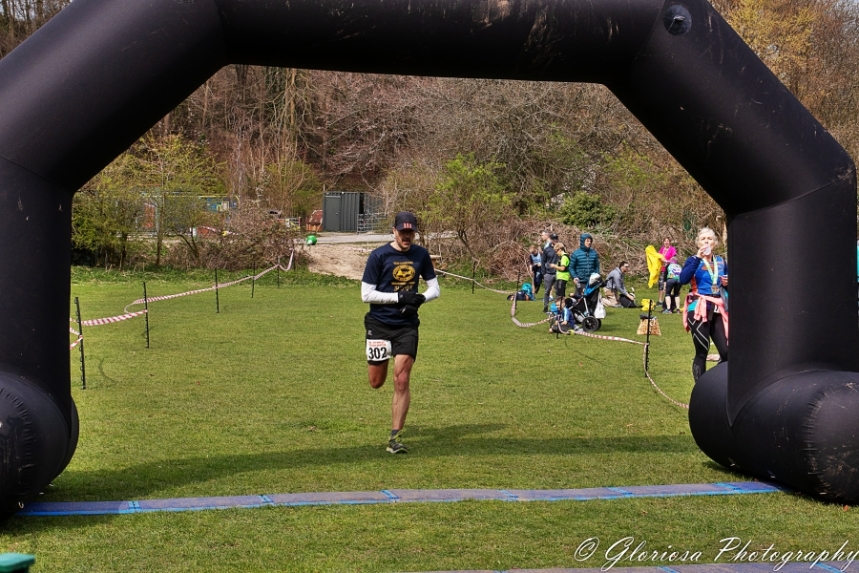 The Finish (Photo by Gloriosa Photography)

I ran into the finish and completed the race in a time of 3.36.15, in 7th place out of 124 runners. This was precisely 9 seconds quicker than last year which I was pretty pleased with despite my inconsistent start to the year through injury and not being physically able to embrace a good training routine at present. It has taken me a couple of days longer to recover from the effort though so my legs are definitely not used to effort runs at present!

A satisfying result for me although room for improvement in the future as with a bit more effort I could/should have run a few more of the hills.

Alex had a storming run finishing first place in a time of 2.59 and setting a new course record in the process. This was a fantastic effort on a hilly course with around 1000 metres of elevation. Congratulations Alex!

Overall, a good day all round for the both of us for slightly different reasons.