The Ridgeway 40 was once again planned as my last long training run before the upcoming GUCR race at the end of May. For those who are unfamiliar with the event, this is primarily a walkers event organised by a local walking association which allows runners to participate. The event starts at Overton Hill near Marlborough between 7.30 – 8.30am (runners are asked to start at 8.30am to ensure checkpoints are open) and heads for 40 miles east along the Ridgeway National trail finishing in Streatley.

There is an overall cut off time of 14 hours although runners are generally going to finish around half that time. This was my fourth crossing of the event having run this last year with Alex and Paul Beechey. Due to the timing of bank holidays this year, the event fell 2 weeks before the GUCR (it was 3 weeks last year) and the plan had been to take it fairly steady.

We had finished around 6 hours last year and despite not having any time goals this year we were comfortable with something a little slower. The main objective was not to take too much out of the legs.

I was once again joined by Paul Beechey and Alex and we were also fortunate to have a solitary crew member Adrian who followed us along the route. Adrian kindly organised a lift to the start which meant we didn’t have to be up too early for the 6am coach this year, bonus!

We arrived at the start around 8.30am, collected our tally cards (which are clipped at each checkpoint) and then set off immediately. The first couple of miles covers fairly rutted ground but the trails then smooth out for some nice running. Naturally, we overtook the walkers over the first couple of hours before it became a little quieter and the field was reduced to the sporadic runner ahead.

Alex bailed just before the half-way point as his ankle was not fully recovered from the Thames Path 100 last week and he sensibly made the decision to stop and join Adrian. This left Beechey and I to continue on. 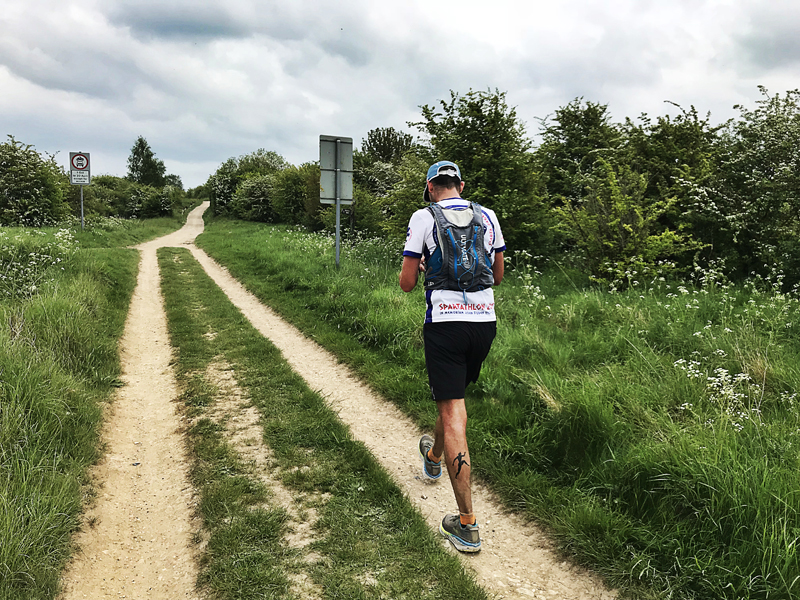 The weather was perfect, sunny and cool with a light breeze and we continued our steady pace for the remainder of the run. I recall last year I was a little under the weather, had woken early and the run had felt a bit more of an effort. This year, despite a few aches in the legs when we got into the 30 mile plus territory I actually felt pretty good throughout the whole run.

Due to the nature of the event, the Checkpoints were fairly frequent and we grabbed the odd snack or topped up our water and said hello to the volunteering team along with Alex and Adrian. Time seemed to pass quite quickly and it was nice to reach the Chain Hill point (end of Leg 3 for the Autumn 100) which marked the last 12.5 miles of the route which was familiar territory for us.

We continued at a steady pace although admittedly (and I blame Beechey for being competitive!) that our fastest miles of the day were the last 3 miles (all sub 8 m/m) when we spotted a couple of runners ahead of us at the final section.

We headed off the Ridgeway along the road and over Streatley Bridge to finish in 6.10 – 6.15 so fairly similar time to last year give or take a few minutes. There were a couple of runners ahead of us at the finish area but as I’ve mentioned before this is a non-competitive event and placings aren’t detailed or a really consideration but a list of finishers is generally added to the website a couple of weeks after the event.

Ali and Beechey at the finish

By way of a Birthday celebration we headed to the local pub for a drink and bite to eat. Interestingly, I was wearing a replacement hat (son of hat) as the original has fallen to bits and through some stroke of luck it actually started to rain (quite heavily) for a couple of hours just as we had arrived at the pub. I think I like this new hat!

It was a good day and an enjoyable run and it was nice to bank a last long run ahead of the GUCR.

The next day I had an entry for the Marlow 5 (miler). My legs were a little heavy the next morning but not too bad overall and so I decided to take part. To be honest, I felt a little nervous on the start line as I wasn’t quite sure how my legs would hold up with a short sharp run but I made sure I did some stretching/warm ups and took the first half a mile a little easier before I settled into the run.

Cheeky bonus run the next day