A grumpy marathon runners tale from the weekend…

It’s heading towards the end of the year and all my main races have been completed (or not in the case of Lon Las) and I’m now firmly in the end of season/mince pie eating/can’t be bothered/wintry running slump where I’ve just been ticking over running wise with no real effort in the running and the weight has been steadily gaining (I blame the fresh bakery at the new Lidl store near me).

I had two events left in the diary which were parts 3 & 4 of the Phoenix Marathon series. To be honest, I wasn’t really feeling fit or motivated and could have easily not bothered turning up but I had A) Paid my money and B) Wanted to complete the series and there was little choice but to turn up and run the event.

I had a chance conversation with a slightly inebriated Paul Beechey the night before whose words of wisdom were “batter the f**ker mate otherwise there’s no point turning up”.

The next day I turned up at the race, collected my race number and then sat in my car for half an hour as I didn’t really want to talk to anyone (yeah I know, grumpy so and so). I attended the race briefing to see a number of awards and mentions. There were a few awards for people who run lots of marathons during the year. What do you get these people who have lots of medals I hear you ask? Well another medal is the answer.

There were a few people doing some sort of World Record attempt to run in a costume together which I assumed was for charity reasons which meant we had chip timing at the event and then there was Bob. Bob had just turned 80 and was aiming for a club record time, way to go Bob. That was probably the most impressive effort at the event today.

I lined up near the start of the race and started near the front of the 120 ish people taking part.

I didn’t really have a plan for the race. My thought process pre-race swung between battering the first half and then coasting the second or just coasting the entire marathon. I just wanted to get it done and go home to be honest.

As the race started, I headed out at a ‘comfortably quick’ (it’s all relative) pace I thought I could manage for the race. I didn’t even look at my Garmin until after the first mile where the watch told me I ran a 7.05 m/m. 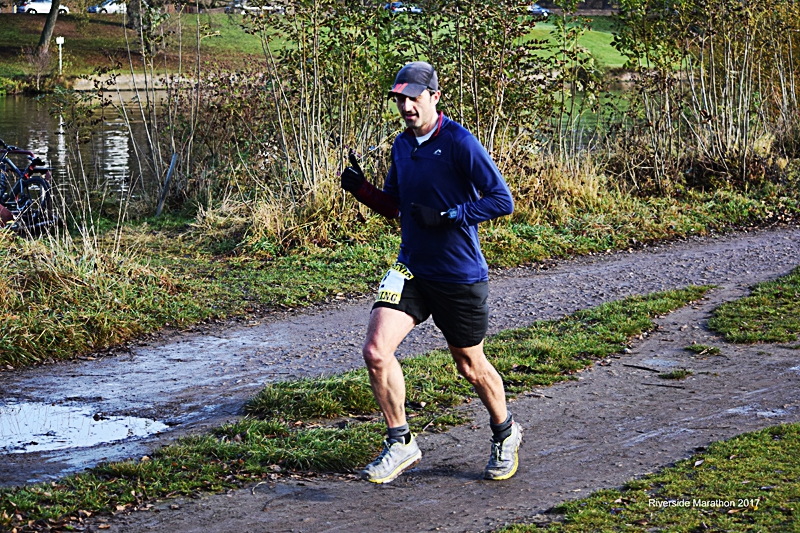 Thumbs up, early days. Photo thanks to Jon Lavis.

I spent the first couple of laps running close to 2 other guys and between us we were hogging 5-7th positions. I was rather hoping one of them would be interested in a chat en-route as this would make the time pass more quickly but neither looked that inclined to engage in much conversation. No problem, each to their own.

As is the usual format of the Phoenix races, it’s a lapped out and back format and I ran out and back, out and back along the paths which were a mixture of dry and muddy waving hello to others runners as I pass them including fellow Reading Joggers Gina and Margaret. Despite the grumpy mood, there was no reason not to be polite to other runners. I completed the first half of the race in 1.32 something and was feeling ok at this point.

Photo thanks to Jon Lavis.

One of the guys near me (who was having a good run at his first marathon) understandably started to fade a touch as it got towards towards the final leg but the other chap was just ahead of me as I stopped for a comfort break at the public toilets near the turn.

I carried on at the same sort of pace and caught up and overtook the other guy to put myself in 5th place with a lap to go. I put in my fastest lap at mile 18 (it was below 7m/m so I’m calling it fast) and perhaps subconsciously I wanted to make sure I didn’t lose a place. Consciously, I could easily have slacked off but I could still hear the other chap behind me so I didn’t have any sort of contingency to coast.. bastard.

I maintained my pace and put on my headphones to distract the mind from the fact that my legs are bloody aching. My effort level massively increases but pace is still ok. I’m actually running 10 seconds a mile quicker at miles 22-24, this is getting strenuous. Someone must have dropped ahead of me as I only counted 3 runners ahead of me as I arrived at the final turn.

4th position is no man’s land and with my legs aching now, I was just about to start coasting to the finish when I spot the 3rd place runner ahead with 1.5 miles to go. It looked like he was fading as I was catching him up fairly quickly. Bastard, I need to continue my effort now.

I did contemplate just coasting on his tail and trying to out sprint the runner in the last 200 yards but it’s too high risk and I could make a total mess of this and crash and burn and so I elected to pass and try and maintain the momentum to ease ahead and build a gap.

Making every effort not to glance over my shoulder I head towards the finish but as I get towards the last 1/2 a mile we arrive at Sunbury Lock with a couple of gates which affords me a quick glance back and no sign of the runner behind me. Phew.

I posed for the podium pick with David (2nd) and the winner Christopher at the RD’s request and congratulate the guys on their run before thanking the marshals grabbing a bottle of water and 2 Freddo bars and then driving home.

PS – So you’ve probably guessed my fitness is probably not as bad as I had anticipated but it was a pretty decent run for me based on a low level of motivation. The pacing was excellent as I ran an even split and it’s fair to say I gave it a good effort judging by the state of my legs the couple of days after. My quads are feeling absolutely destroyed at the moment and jogging home from work the next couple of days has been particularly uncomfortable if that makes anyone feel better (Rob).