The Eastbourne Trackstar marathon is a new event by the “We Run, They Run, I Run” team and I had entered as part of the Birthday weekend away with the wife. Timing wise, this was my last long run prior to the GUCR in a couple of weeks time and I had planned  a “90%” effort to ensure a good workout but I didn’t want to run too hard leaving me recovering for this event. The event was a track marathon so 105.5 laps of a 400m track at Eastbourne Sports Centre (the finish location of the SDW50 & SDW100).

We were staying over at a hotel 5-10 minutes away and I was dropped off, registered and then placed a few gels and a couple of drinks at the designated area on the back straight of the track where the supporters were situated. I said hello to a couple of faces I recognised before attending the race briefing and made my way to the start of the race. The weather was really good, sunny and warm but there was a bit of a wind on the track resulting in a tailwind on one straight and a headwind for the other straight.

The event organisation was good, everything was clear, good facilities, plenty of marshals around and music planned on a PA system during the race. The event was limited to 80 people which meant a little bit of overtaking (instructions were to overtake on the right) but not too busy and the event was also chip timed with the team letting people know (well they did for me) when you were on your last couple of laps. I did use the manual lap facility on my Garmin to keep track aswell although I didn’t press the start button hard enough and only realised my Garmin hadn’t started after completing the first lap, so I had an extra lap in the bag already.

Race start (Photo by The We Run, They Run, I Run Team)

We started at 9.30am and I lined up near the front with James Bennet (who had just run the NDW50 the day before) as we set off. There was a bit of movement for the lead positions on the first lap or two and I settled down into around 5th position (I think) as I focussed on getting into a steady rhythm around the track.  My 90% effort plan had been to run close to a 1.30 first half and then ease off a touch for the second half and perhaps run around 3.10 – 3.15 but running at a pace I could maintain for the whole race. Mentally, I had broken the race down into 10 lap segments with a drink or gel planned after each set of 10 laps.

Photo by the We Run team

A couple of the lead guys lapped me a few times within the first 20 or 30 laps as I stripped off my base layer quite early as I was feeling pretty warm. I was running a solid consistent pace of around 6.55m/m and feeling good. It wasn’t long before I was lapping people regularly as I counted off the laps and following the same routine of 10 laps, take gel, 10 laps, drink, 10 laps, gel, 10 laps drink and so on. The pattern of the run around the track was the same with the wind assist for half the lap and wind against for the second half. With the short laps of 400m, I was ticking off laps pretty quickly with each one taking me between 1.45 – 1.50 aside from every tenth when I veered off to grab a gel or drink and lost a few seconds there.

There were a number of supporters cheering on the runners and people acting as personal crews and so round and round the track we went
seeing the same faces each lap. I hit the half-way point around 1.30 as per plan and continued on at the same pace as I was feeling pretty
comfortable at that point. 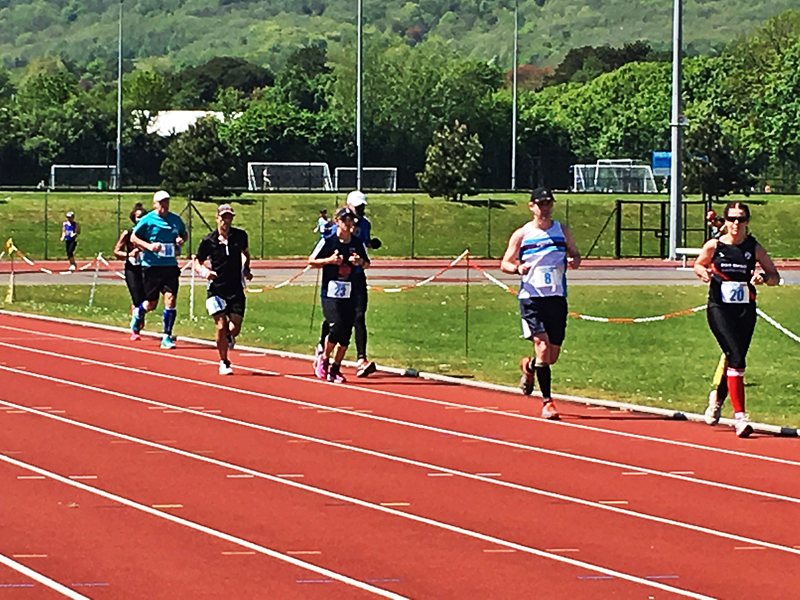 Running lap after lap.. after lap

The second half of the race followed the same as the first, 10 laps, take gel, 10 laps, drink and so on. The lead runner looked pretty strong and was giving it a good level of effort but a couple of the other guys ahead of me started to fade a little and I gradually reeled in a few people and gained a few places as I was pretty much maintaining the same pace. To be honest, this was a bit of an incentive to maintain the same pace and I didn’t ease off as planned. However, I was running very slightly within myself and I felt I could maintain the speed reasonably comfortably.

Mentally,  it was good to tick off the laps and reach milestones like 70, 80 and then 90 laps although I could start to feel the effort levels rising to maintain the pace at the 90 lap mark. Thankfully there wasn’t too far left to go at this point as the end was getting closer.

I had moved into 2nd place by now with a handful of laps to go with the lead runner about 3 laps ahead of me as they rung the bell signalling the start of his last lap.

Watching athletics on TV, the best element of the race was always hearing the bell on the last lap of a race and having someone acknowledging that at this event for the runners was a nice touch. As soon as I heard the bell, I kicked and increased my pace around the first bend. In my mind, I was sprinting full tilt and then I hit the headwind and started blowing hard. I conserved my energy along the back straight and then picked up the pace around the bend and strode to the finish with a 1.25 last lap. Not quite the super sprint all the way around but a bit of effort. My finish time was 3.04. 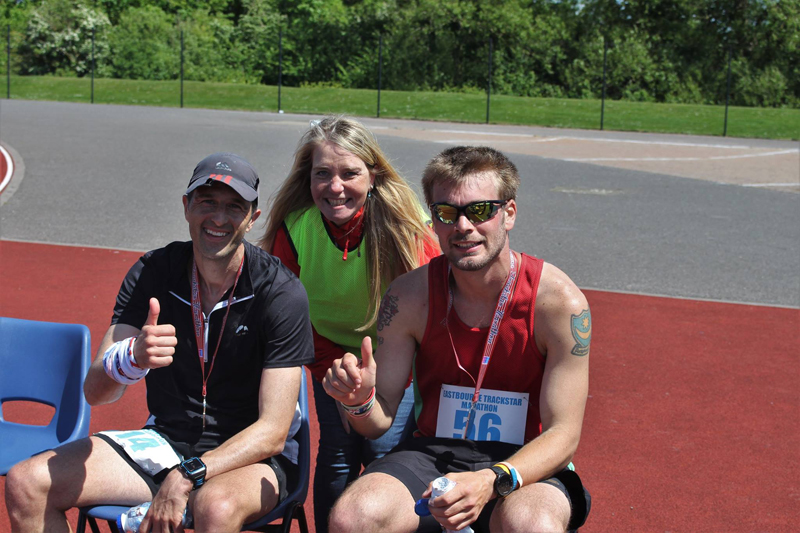 Photo by the We Run team

It was a pretty good run overall but probably closer to 95% effort than 90% but with no injuries to report and feeling ok after the race I’m happy with a decent last workout before the GUCR. I collected my medal and sat down briefly and had a drink before heading off. There were shower and changing facilities at the end which I took advantage off before heading home.

Thanks to the Zoe, Rusty and the rest of the team for a well organised event, I would definitely recommend this track marathon to others.. if running around a track is your sort of thing of course! Well done to everyone else who took part.

Pictured with the Race Medal (Photo by Sally-anne)