I’m delighted to be writing about my first sub 3 marathon finish. This was one of my running goals this year having got pretty close last year with a 3.00.42 run on the back of doing a bit of speed work for the local half marathon.

I’d always felt this was achievable but knew I had never really put the effort into my training with some dedicated speed work. Therefore at the start of this year I made a bit of effort by dropping my weekly mileage a touch and adding 1-2 quicker sessions per week (typically a short lunchtime interval session or short progression run and a slightly longer tempo run). I can’t say I’ve really hit all these sessions every week but I’ve made a bit of effort and it’s surprising how a small amount of quality effort can pay dividends.

February was dominated by the Run Until You Drop challenge where challengers aim to run the same number of miles or kilometres as the day of the month from 1 to 28. After two years of running the miles challenge I had originally decided just to do the kilometre version so I could ‘play’ along but without really impacting my planned training with lots of junk miles. 3 weeks into February and I was up running 8-10 miles at 5.30am ‘to get the miles in’ before a lunchtime run and an evening run so I got suckered into the mile challenge again just through some form of obligation to lead by example as I was ‘running’ the challenge (see what I did there).

This meant a week before this race, a good marathon effort was never on. Monday and Tuesday had seen me cover 27 and 28 miles over 6 runs to complete the Run Until You Drop challenge. I was tired from a week of very early mornings, the legs had no energy in them and a few niggles had started to appear. I went to visit my friend Matt Brown on the Thursday evening before the race, who is currently training to be a sports physio for a leg massage. He asked me to stretch my legs to see what mobility I had and then laughed at the results, he then poked around the knots on my legs and laughed again…. and then he got to work.

In terms of a ‘perfect’ build up this definitely wasn’t it. I had targeted London to be the race I made the effort but I knew I had run a decent time at this race last year based on high mileage and I thought sometimes you’ve just got to roll the dice and see what happens…

I lined up at the start of the race on the Saturday (having rested the day before). The weather was pretty good, clear but not too cold and thankfully the predicted rain had come a day early. This did mean ground conditions were muddy and slippy in parts. There was also a slight wind on the day although with 4 laps on an out and back course this was favourable on the way out and less favourable on the way back.

There were more starters than usual at this race today (125+ finishers) but with these type of races which are designed to be small low-key and friendly then there is a real spread of runners and if you run close to 3 hrs then you will generally be near the front. We set out at 9am and within the first 30 seconds it didn’t feel like there was anyone taking on the race today. I simply couldn’t afford to drop any time at the start easing myself into the race and I hit the front early. This felt unusual but my personal time was the real focus here.

Conditions were good although there were a few muddy parts early on where you had to take care. Pacing wise, I had planned to run the whole race consistently but I wanted to do the first 2 laps (out of 4) in under 1.30 giving me a minute or so for the second half. I started out with a 6.46 and then 3 miles closer to 6.30m/m that early energy but then pretty much settled into the 6.40m/m to 6.50m/m range. I hit the turn point to see no-one behind me initially before I headed back and soon spotted the second place runner. Taking the lead of a race early on was a bit of extra pressure but I was more focussed on the watch and perhaps if someone had paced it steadily at the start and finished strongly I could hang onto the later perhaps? There was definitely a little bit more effort being made on the return lap to keep the pace consistent into a slight wind and I soon started to see the rest of the field and tried to give a quick hand gesture wave or a breathless well done to the other runners where I could.

At the Turn Point. Photo by David Davidson.

Fuel wise, I had carried three gels one for the end of each of the first 3 laps. I had some sports drinks near the start/finish area but I didn’t use these in the event through not wanting to lose a few precious seconds stopping, bending down and picking these up. There were also no toilet stops today so I had made sure I hadn’t drunk much that morning either, every second counted today.

This is the real ‘heart’ of a hard marathon run. You spend the run moving your legs as fast as you can, constantly fixated on your watch and mentally calculating mile splits and finish time down to the last second.

There was a definite an ebb and flow with the run and it wasn’t a straight single pace effort. Slight environmental factors like a head wind our muddy section of the course began taking out a few seconds here and there and as soon as I saw the current mile split drop to 7.xx something then I tried to inject a bit more pace within a quick 20 or 30 steps to keep it at 6.xx something. This was happening a couple of times each mile on the return leg.

I arrived at the half-way point at 1.28 something, consumed my gel, grabbed 1/2 cup of water and then headed out for lap 3. Time-wise if the pace slipped to 7m/m I could still achieve the goal. However, if I could make an effort on lap 3 and keep the time below the magic 6.52m/m mark then anything I saved this lap could be spent the next lap and so I continued with the effort and ran the 3rd lap between 6.40 – 6.50m/m pace. Effort wise, I felt ok with my breathing and control but my right quad was feeling the impact and felt a little sore.

The rest of the field was pretty spread out now and I had started to lap a few people. As the event was held on a public path there were a few people out walking which meant taking a little care and avoiding a couple of bits of ‘traffic’.

At the end of lap 3 I was still holding 1st place position with the second place runner (Michael) a few minutes behind and then a bigger gap between the 3rd place runner. Barring a blow up on the last lap it was going to be a good day.

However, it was back to the fine margins on the watch and I set out for the last lap with some relief this was the last one but some concern that any slip could ruin this effort. My turn mile where I grabbed a drink was 7.00m/m and my slowest one to date but I managed to bring it back with a 6.53, 6.50, 6.54m/m. I was just creeping over the 6.52m/m mark but had a minute plus contingency although the effort level to maintain this was creeping up. 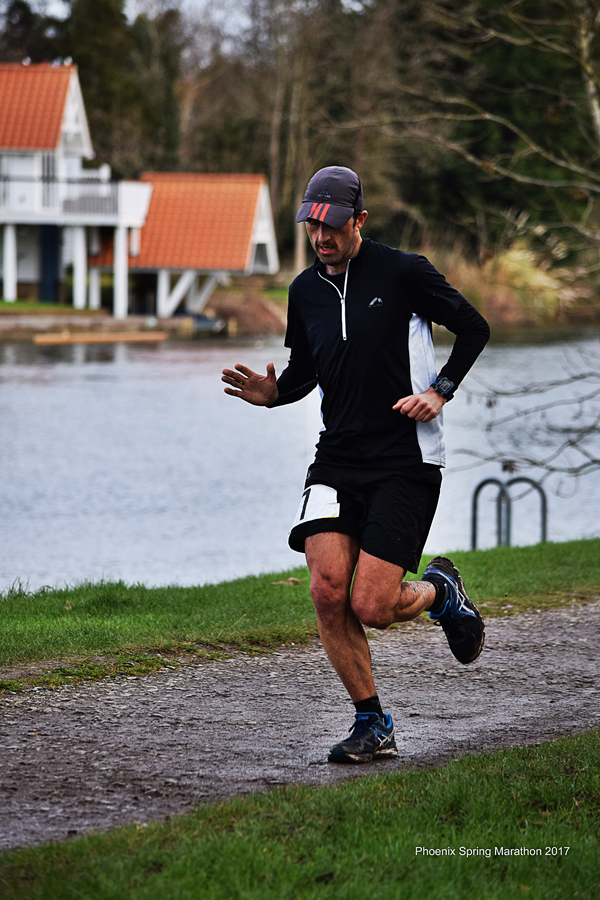 Still giving it some effort. Photo by Jon Lavis.

I arrived at the final turn point and set out on the way back just 3 something miles to go and this would be done. The headwind felt more blustery on the last lap and despite trying to get the legs to turn over, every time I glanced at my watch the pace said 7.xx something and so I kept trying to add those 20-30 quick steps each time. My pace did slip slightly on the last few miles with a 7.01, 7.07 and a 7.01 but I had more in the bank than those 30 seconds over average needed pace I lost.

As I arrived towards the end it was great to finally see the finish line in the distance with 2.57 something on the clock and a couple of hundred yards to go. I dug in for a final push and hit the finish line in 2.58.29; sub 3; new PB and the race win to boot. A dream like finish! It was a pretty solid and consistent effort throughout the race aswell which was good.

Thanks to Rik Vercoe and team for hosting the event and thanks to all the other runners for the odd wave of support and encouragement. It was great to finally achieve a 2.5x marathon time (and in slightly tongue in cheek fashion) I can go back to plodding really long races really slowly. On a more serious note, I will try and keep up with the speed work although I will continue to use marathon events as good training runs for the ultras so don’t expect this every time I run a marathon!

A final thanks to Jon Lavis for some of the photos here. Jon pops up at races from time to time and is always kind enough to share any photos he takes which makes this blog (and others) look more interesting.

Race Results can be found here

Strava activity can be found here