I’m not sure how interesting this write up will be when I was essentially running 10 x 5 mile laps around a field at night but here goes..

The Endure 1250 is the little brother to the Endure 24 event. The event involves three different races a short 50k race, a 50 mile race and a 12 hour event, which also caters for team options. The course is 5 mile trail route around Beale Park near Reading and the event starts at 7pm on the evening and finishes at 7am in the morning.

I had run the 50k last year as a training run and had enjoyed the low key nature of the event with a few hundred runners compared to a couple of thousand at Endure 24, it was smaller and perhaps a little more intimate.

Four days before the event and I had even entered, it wasn’t even on the radar with only a very recent return to running after a few week lay off (refer to the Monarchs Way blog). Essentially a midweek conversation with Stouty (who had entered the 12 hour event) led to an entry. With only a Half Marathon and one 20 mile run being the only long runs I had completed in 6-8 weeks I decided that I wasn’t fit enough to try and the run 50k fast, wasn’t fit enough to try and run for 12 hours solid and so the 50 mile race looked the best option.

It would be good to get a few miles in the legs if I’m going to have any chance of being on the start line of the T184 (a family holiday in-between now and then with limited running also a factor). Covering a 50 mile distance meant I could finish some time late night/early morning and then go home with the race venue about a 15 minute drive from my house. So that was the plan.

Pictured with (from left to right) Myself, Stouty, Mike, Paul & Alex

Little preparation was needed, I had a cooler box with some drinks, a few snacks, spare head torch and a extra layer ready and I left this near the start/finish area so I could access this each lap.

The plan had been to run at a steady pace and see how it went. I really wasn’t sure of my overall fitness levels and thought the second half of the race would be a bit of run/walk if I’m honest. The weather during the day had been really warm and it was still feeling pretty muggy as we approached the race start time of 7pm.

Running with Wendy on the first lap

The race started 15 minutes later than planned and I ran the first lap with Wendy Shaw who was running in a pair with Mark another local runner and we covered the first lap in 38 minutes something, a bit quicker than planned but ok on fresh legs. Stouty was a short way behind us and Alex was a little ahead of us. As Wendy tagged her partner I continued by myself following the field round the first 2k and then back around a circular route to the start and then along the river through lumpy fields back towards the start and then a loop across the other side of the course and back to the start/finish zone.

The route was mainly fields with about 25% of paths and I had opted to wear my Hoka Speedgoats for comfort, which felt like a sound choice in the end with only a small blister on one foot to mention.

I carried on lap after lap, counting up the laps to 5 and then counting down to 1. At the start/finish zone of each lap, I would pause briefly (no more than 30 seconds to a minute maximum) to grab a quick drink and snack and then head off for the next lap. There was a race announcer commentating on the event and as I crossed the line after lap 3, was advised I was in 3rd place in my category. Nice to hear but we were only getting warmed up at that point.

The event was being supported by some local club runners and it was nice to see some familiar faces at odd points around the course and get a bit of morale support.

I managed to cover 4 (and a bit) laps in the light before I needed my head torch, which I had carried from the start and continued on in the dark. It was a lovely warm evening with a full moon giving some element of natural light. With the warm weather and the fact that I was still running, I was feeling pretty warm, and sweaty and had a real thirst and used the mid-way drinks station on a few occasions for a drink or just to splash some water over my face and chest.

As the evening turned to night, the race commentator went quiet to allow those camping to sleep as I carried on. I was overtaken a few times by (I assumed) the occasional relay or 50k runner but in the dark I had no idea which position I was in and it wasn’t really worth stopping at the start/finish zone to check the TV screen cycle through the various leaderboards for each category and so I just carried on running, ticking off lap after lap.

I ended up running a couple of laps (laps 7 and 8) with Heidi a fellow club runner who was running the pair’s event with a friend. We hadn’t really met before so we ended up having a chat about running and other random rubbish for a couple of laps (and I even persuaded her to run one more lap then she had planned!). This really helped pass the time at that phase of the race where I could have started to flag. 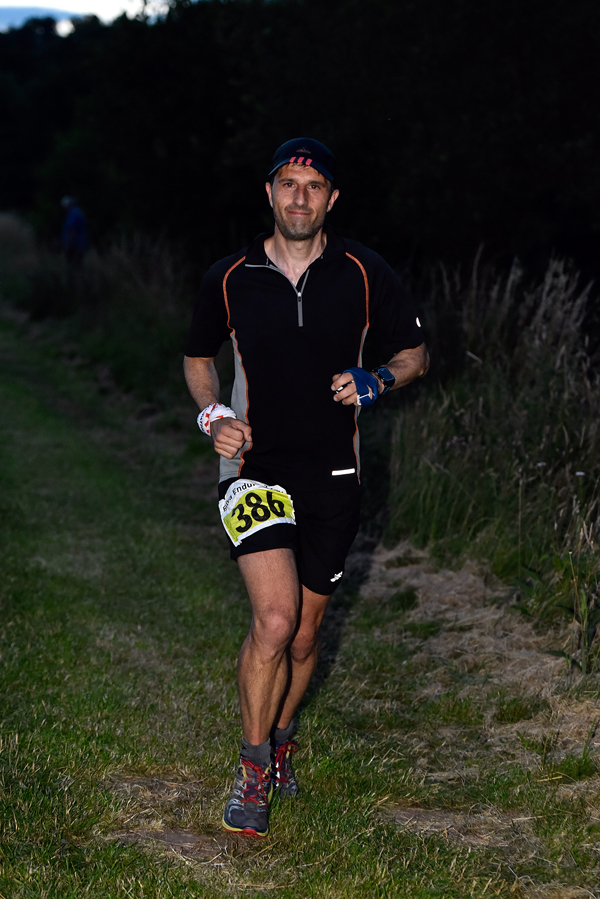 By the time Heidi left me, I had two laps to go. Looking at my watch and I had only been running for just over 5 ½ hours and had 10 miles to go. I had settled into a pretty constant 9 m/m pace and had been eating and drinking every lap so whilst the legs were stiffening up and the knees felt like they had taken a pounding, I was feeling ok energy wise and mentally still quote motivated to continue to run.

I came into grab my drink at lap 8 and saw Kevin Massey (who was supporting his wife Sarah who was running the 12 hour event) and asked him if he could check the leaderboard and give me a shout where I was when I passed again on the next lap.

The penultimate lap was a bit of a grind as I started to repeatedly count to 10 in my head over and over through sections and ticked off the different kilometer markers.

I passed the start/finish zone but elected not to stop for a drink and see out the race. I spotted Kevin and gave him a shout but he either didn’t hear or see me and I didn’t get the call where I was. No worries, you can only run what you can run and I carried on.

It has struck me that I had run every step off the race so far. I’m a regular at the Thames Trot each year which is a comparable distance (48 miles if you run the non-flooded route) and even then I end up having a little walk break towards the end of the race at some point. I felt pretty motivated to run the entire last lap and complete the entire race running (a rare achievement on any ultra of that distance for me). In addition, if I could maintain the same pace then I would be close to last years winning time of 7.10 and used this as motivation to keep going.

The effort level increased on the last lap with this motivation but unfortunately the pace only crept up marginally and I just started to reach the point where things started to feel a little uncomfortable. My knees were really sore by now (others mentioned they felt it hard underfoot so may not just be previous injury related), my stomach was feeling uncomfortable but there was no stopping now and so I carried on around the course trying to take my mind of it by ticking off each kilometer marker and telling myself I won’t have to run this section again.

As I got a little closer, there was a slight surge of adrenaline as I neared the finish, through the wooded area with the fairy lights, down the short path, sharp right and then a sprint to the finish. The time on the clock was 7.06 – 7.07, a new 50 mile personal best by some margin and running every step of the way.. How on earth did that happen?

There was a marshal at the finish point who approached me and I let him know that I had finished the 50 mile event to which he replied I was first home, another unexpected result!

He kindly let me sit in his chair for a couple of minutes as I removed my chip tag and then I collected my medal and headed back to see Kevin and sit (lie) down for 10-15 minutes to get a drink before heading home.

So pretty consistent second half of the race where I had half expected the wheels to have come off. Position wise I had been in 2nd place up until lap 7 about 5 minutes behind the leader. We actually both finished lap 8 within 18 seconds of each other (not that either of us really knew it in the dark around midnight time) but the other guys pace dropped off the last few laps and by being able to maintain the same consistent pace meant I built up a 10-15 minute cushion in the end. So some decent pacing by me for a change… although I was pretty thankful the race ended when it did as my reserves were starting to run out.

I think early year mileage and some decent rest after a brief injury layoff got me through the event but it was a little unexpected.. (not that I’m complaining at all).

Overall, it’s good small sized event and dare I say it, I prefer the intimacy and small numbers to the bigger Endure 24 event. Being a short drive from my house means I can definitely see myself running it again in the future. Thanks to Race Director Chris, all the volunteers and supporters for hosting another well organised event and well done to all the other runners who took part.