The Reading Half Marathon is my local event and a race that I have taken part in for the last 11 years (yes.. even longer than the Thames Trot). It’s one of the largest Half Marathon events in the UK with between 10-15,000 runners, well organised and well supported by the locals and a good feeder race for London although it is a bit on the expensive side (approx £40 this year).

As a novice runner in 2006 the thought of actually running 13.1 miles was a challenge but these days its trying to run quicker times which is the more worrying prospect and I’ve dubbed this event “my once a year speedwork session” although I have settled into a habit of alternating between a fast year and a fancy dress year so I can enjoy the event from a different perspective (i.e. can’t face trying to run quickly two years in a row) and as a local event I have participated each year since my first run.

The event starts and finishes at the Madjeski Stadium (home of Reading FC) and as this was only a few miles from my house I decided to jog to the event (slowly) to save any parking logistics/issues and jog home at the end. Weather wise, we had a nice warm day which meant the crowds were out in force.

Dean Allaway was the 1.30 pacer so as long as I stayed about 50 yards ahead of him I should be fine. I did a bit of a trial run a few weeks ago at the Phoenix Marathon when I set out to hit a sub 1.30 first half and then hold on as best I could. I managed to run a 3.00.53 marathon that day so in the back of my mind thought there was no reason I couldn’t achieve this today particularly as I was only running half the distance.

I was pretty blasé about the race to be honest and just relaxed at the start whilst watching a range of people go through their pre-race routines and playing the game where you try and identify those people who start near the front of the field who then slow up or even walk by mile 3 (yes, there were a few).

The race started at 10.15 (although the brochure said 10am) so we hung around for a bit longer than expected before we set off.. or we expected to set off as the yellow zone runners (1.20 and under) went off and we were held for 3 minutes before we could go.

The first half a mile of the race is the least enjoyable with people cutting in and out to find some space, some people trying to hit their planned pace immediately and a few chancers who go off fast and soon slow down and then hold others up. There’s nothing different here from any other big city (town) race and it’s just something you manage.

Matt and I both hit a quick pace early to get around any early traffic with a 6.16 and a 6.08 so Matt’s pacing plan went out the window straight away! We did overtake a few people early and got ahead of Dean (1.30 pacer) and the usual roadblock that forms around the pacers. We managed to find some space with about 500 runners in front of use and about 10-12,000 behind us so no issues from that point and then settled into the race.

I managed to drift ahead of Matt and continued on by myself spotting the odd friend and work colleague in the crowd. At the Reading University 4 miles in I grabbed one of those water packets at the University which I still haven’t worked out how to open so just bit into it and squeezed some water into my mouth.

I forged on down towards the town centre passing my other buddy Matt Brown, underneath the IDR with the drum band and through the noisy town centre. There’s a couple of small elevation gains and I made an effort to push these a little so I didn’t lose anytime from my current pace.

The second half of the race can be described as ‘comfortably hard’ which may sound like an oxymoron but describes the fact that I was running (relatively) quickly, could hold the pace and knew I was making a bit of an effort but not to the extent I was heavy breathing.

The pace did slow a touch in the second half to the 6.30 – 6.45 range and I focussed on just maintaining the pace. I don’t do enough (any) speedwork/track/hard hill sessions to go any quicker to be honest so that felt about the best I could manage.

I passed my wife and daughter at Prospect Park and they kindly grabbed this photo and headed back towards the Madjeski Stadium. 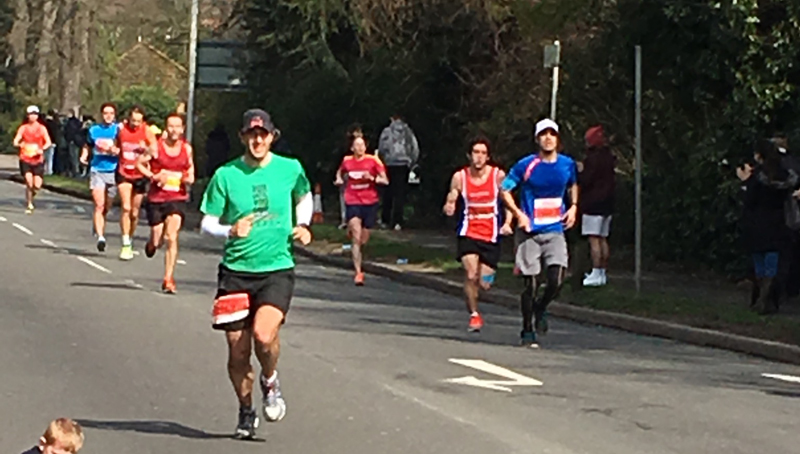 Passing Prospect Park about 8-9 miles in.

I took a gel around here for the last boost and focussed on maintaining the same pace. The weather was getting a little warmer now and the crowd support thinned out a little here. A few glances at the watch meant I was still on for a new PB time by a couple of mins as long as I didn’t slow down which I didn’t expect to. The race was passing relatively quickly which was good.. that’s one bonus of running marathons or longer everything else seems like a really quick race.

The last few miles sees runners head down the A33 and straight towards the Madjeski Stadium. In previous years there would be an extra 1 mile loop of Green Park but the course was amended last year so you do a section at the start meaning you can see the Stadium a couple of miles out and not be diverted away from it.

I ticked over the last mile or two, headed into the stadium, managed to eek out a bit more speed for the final few hundred yards and finished in a time of 1.25.12, a new PB by 4.5 mins which I was pretty pleased with.

I moved through the finish zone quickly, received my finishers T-Shirt, medal, grabbed a drink and then after a brief word with a couple of people started a slow jog back down the course and home looking out for any friends running. Matt Coggins finished in 1.27 and a new PB for him so a good day for the both of us.

I managed to spot a few people and gave them a shout out and it was nice to support a few people still running and stopped with Duncan Glenn and family for a few mins who were running an unofficial Fetchpoint armed with strawberry sweets.

However, it was fair to say I got a couple of comments from people who were still a few miles away from the finish who spotted a finisher running back and thought I was taking ‘liberties at the expense of others’. There were a few well done’s and banter and a few who were mildly irritated that they still had a few more miles to go! No offence intended, the route is a mile from my house and I wanted to support a few friends, club runners and work colleagues.. honest.

A good ‘comfortably hard’ run, new PB, nice day. No complaints at all today, I’m actually a happy chappy after this race and looking forward to planning next years fancy dress outfit and the two year gap before the next hard effort!

My quickest run ever! It’s all relative I know but I was pleased with the effort.

One Response to “2016 Reading Half Marathon”