I totally and unashamedly ran this event purely for the medal…

This was my first Saxon Shore event organised by Race Director Traviss Wilcox. I’ve mentioned before that I enjoy the small low key, social and Traviss organises a lot of these type of events. Unfortunately, these are based in Dover/Kent area and a little outside the area I like to drive to in one day. However, when I saw he was putting on western themed event celebrating the 50th anniversary of the film “The Good, The Bad & The Ugly” (the greatest western of all time and one of my favourite films) then I knew I had to add this to my collection of medals… which all sit in a shoe box in a cupboard but never mind that.

Why do I like the film so much? It tells the story of 3 criminals, the enigmatic vigilante ‘Blondie’ (Clint Eastwood), the deadly Assassin Angel Eyes (Lee Van-Cleef) and the irascible and uncouth Tuco (Eli Wallach) who all wind up on a hunt for a hidden cache of gold coins. The plot is fairly straightforward but there are so many elements which make this film a classic from; the interplay of the characters; authenticity of the locations and supporting cast; all the wonderful sketches which link the film together; the humour of the film and all over-layed a brilliant sound-track.

There are so many iconic scenes in the film with the close up eye shots, the Mexican standoff, the shown down with gang in the bombed out town, the run in with the Confederates and Tuco dancing run through the graveyard are my personal highlights. Eli Wallach absolutely steals the film in my opinion. He’s a fairly loathsome character but you end up kind of liking him. If you haven’t seen the film then please go and watch it. I am a genuine fan of this classic film and you can see why I wanted the medal!

Back to the run itself takes place at Fowlmead Country Park which has a looped cycling track of 2 miles in length and the format of the marathon would be 13 laps of the circuit. The cycling track is on the top of the hill and being near the coast meant it was going to catch the breeze. The wind was actually pretty strong in some parts resulting in a fierce headwind for just under ½ mile of the course every lap.

This was a planned training run as part of my build up to the TP100 so I wanted to run a good effort but not to the extent that I couldn’t run the next day comfortably (the 90-95% effort). I have been participating in the “Run Until You Drop” challenge which sees participants run a mile for every day of the month and so my previous 6 days taper was 20, 19, 18, 17, 16 and 15 miles so I wasn’t sure how my legs would hold up during the race.

About 100 people took part and I lined up close to the front as four people set off in front of me. I ran with fellow Run Until You Dropper Ash Gilbert for a few laps as the field spread out. One of the initial four leaders dropped off quite quickly leaving three people ahead. The guys were running around 7m/m pace so (no disrespect intended to anyone) but it wasn’t the fastest field (i.e. I was near the front!).

Ash paused at a Checkpoint after a few laps and I carried on by myself and gradually caught up with the guys ahead and then managed to find myself in the lead at the half-way point which was a bit unusual. I went through the halfway point in around 1.37-1.38. Comfortable but not that quick really.

My pacing at marathons has been pretty good recently which is generally down to the fact that I’m not running these at maximum effort (back to the 90-95% effort approach) and if I’ve ran the first half comfortably then I can run an even or fairly often a negative split during the second half. Whether or not it was the sub-conscious pressure of being out in front or not (probably was) but I picked up the pace in the second half.

There was a fierce wind on the track which meant running into a headwind which was tough going on that section but it was simply a case of head down and get through it. My Garmin splits showed I was losing 15 seconds per mile every other mile just on that section so whilst my effort was even my mile splits kept bobbling just below and just over 7m/m depending on whether that mile included the windy section.

I was lapping people quite frequently now which is good motivator when you’re running and I tried to offer some encouragement to all the runners and I found people generally friendly with a quick wave, hello or the odd comment (not you again!).

I liked the lapped events as it helps me compartmentalise the race and I worked my way round the course counting down lap after lap. Prior to the event each runner was given a batch of hair bands and after each lap the runners dropped a band into the box and on the final lap were asked to grab a small flag to carry around to signal they were on the last lap.

I was running comfortably, the legs were holding up ok and I just focussed on maintaining the same pace. It’s probably fair to say there were a couple of glances over the shoulder when you could look across the track but it felt as if I was building the lead on second place.

The last few laps were ticked off, I grabbed the flag and set off on the final lap, endured the headwind towards the end and ran to the end finishing in 3.09 and in 1st place for my solitary marathon win. (Thanks to all the sub 3-hour runners for not turning up today!) I ran the second half a few minutes quicker than the first half so judged the pace well again and the legs held up despite the recent mileage so it looks like the first traces of good fitness are starting to come through.

Well done to Steve Edwards who came second in 3.17 and Ash Gilbert was 3rd in 3.18 with a new PB by 13 mins and well done and all the other runners who braved the winds! 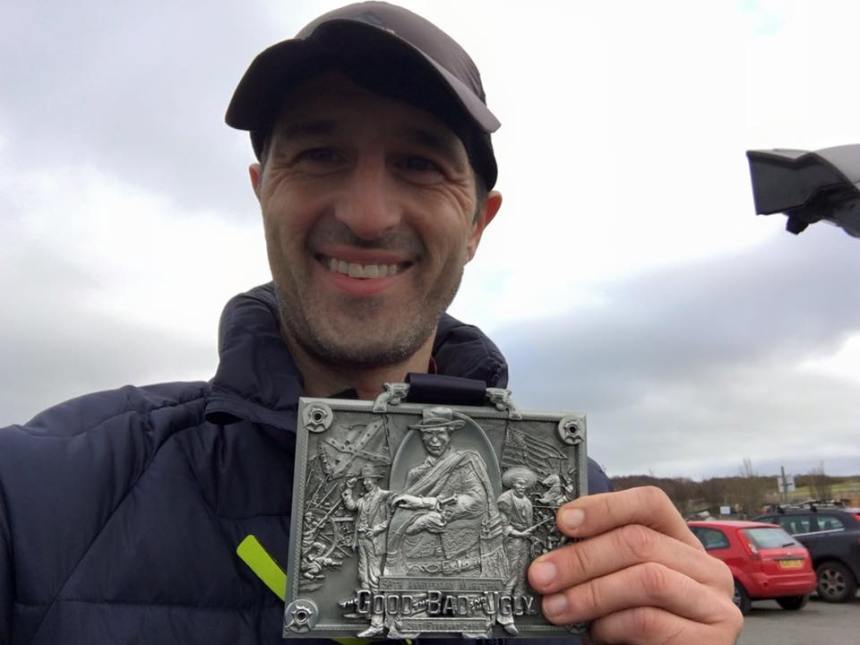 I finally got my hands on the awesome looking medal which looks great and stayed to watch a few of the other finishers before heading off on my long drive home.

Thanks to Traviss and Rachel for putting on the event and all the marshals for standing around on a windy course to support all the runners. The event was well organised, friendly and fairly low-key which meant which was just how I liked it. Despite the long drive back it was a worthwhile trip and I will try and make another Saxon Shore event in the future.

Finally a thank you to Graham Siodhachain for taking lots of great photos of the event a few of which I’ve used here.