Another year and another run at the Thames Trot. This is my typical early season (if you count these things by year) warm up and involves a muddy 48 mile run along the Thames Path from Oxford to Henley and this would be my 8th running of the event. As always, this is a good training run and a benchmark of my fitness (after the usual Xmas blow-out). I’m probably ½ stone over ideal weight although I have been logging quite a few miles in recent months (and I realise this is going to sound a little ridiculous) but I’ve been drifting through 100 mile weeks so I don’t feel as if I’ve been really ‘on it’ training wise. However, the mileage volume means my fitness is probably better than usual at this time of the year.

The timing of the event means it’s pretty popular with an estimated 300 runners taking part and for some it’s also a good recce of events like the Thames Path 100 or T184.

My history at the event ranges from finishing around the old cut off time in 12 hours on my first attempt (a very long walk!) 8 years ago to finishing around 7.30 last year so a slight improvement over the years! The event has seen all sorts of bad weather conditions from ice and snow to rain and flooding and of course mud. The weather conditions this year were not looking favourable with a day of rain and very strong winds predicted.

Thanks to Adrian Lee for the lift to the start, Adrian wasn’t running this year but was supporting a few of the Reading Joggers. We arrived 45 minutes before the start which was sufficient time to collect race numbers, say a few hello’s and grab a picture with a few fellow “Run Until You Drop” runners (a February running based challenge where you have to run a mile or km for each day of the month). As this was Day 6 only 6 miles were needed and I was running 48 miles so I definitely over-achieved this day! 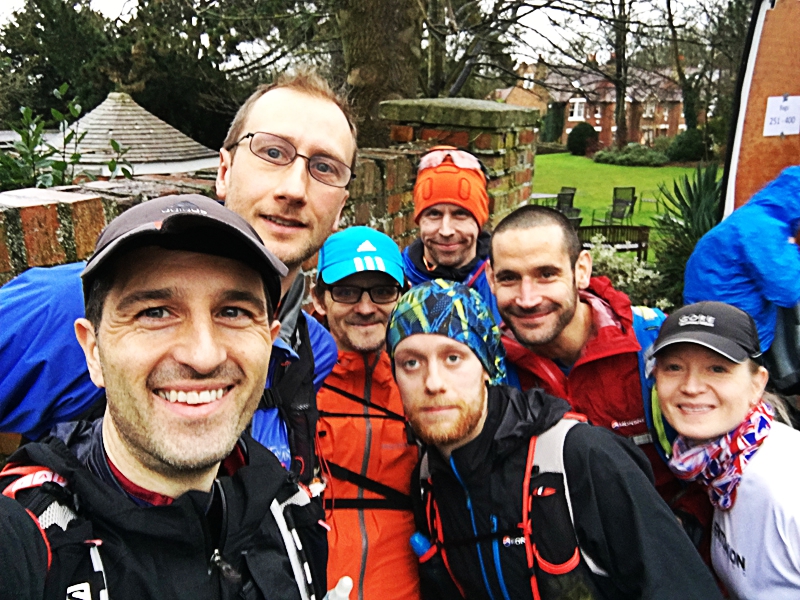 Some of the Run Until You Droppers Class of 2016

There was the usual conversation about plans and estimated time for the day and I thought my range would be around 7.30 (good), 8.00 (ok), 8.30 (a bit slower than expected). I wheel this phrase out a lot but this was just ‘a training run’ and I was not worrying about specific time goals just an approximate range of where I would finish.

I lined up near the front to get ahead of the main pack for the early bridge crossing and we set off into light rain with Centurion Runnings Craig Colgate (annual winner) and a few others sprinting off ahead. I spent a mile or two chatting to fellow RJ Barry Miller before he pushed on (Barry finished 4th in a fantastic time of 6.44) before settling into a comfortable pace resulting in a few people drifting ahead of me for the first leg. 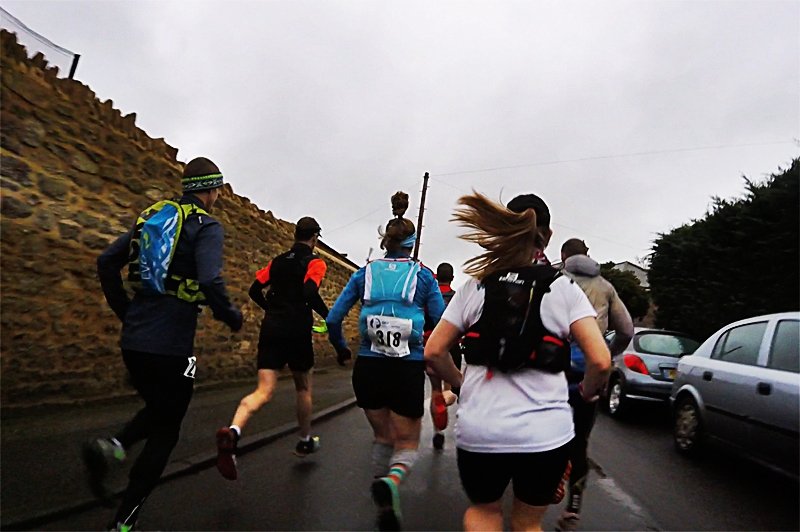 The dash at the start line

The Thames Path is a real mixture of muddy paths, fields and some surfaced paths so you have a mixture of all conditions. The first leg was muddy and miserable and I was slipping and sliding all over the place regretting my shoe choice. My trail shoe options were the Inov Race Ultra 290’s (comfortable but no grip), Salomon Sense Mantra 2 (slightly better grip but hard on the feet) or my Inov8 Trailroc 255’s (best grip but not comfortable at all on the paved sections). I went with the Mantra’s which is a shoe I said I would never run more than a marathon distance in but felt this was the middle option between comfort and being able to keep my footing on the muddy sections.

The first leg felt pretty grim with the rain getting a little heavier as we headed towards the first Checkpoint near Culham. I had elected to wear my waterproof jacket (Salomon Bonatti which did a fine job) from the start on the basis that rain was predicted most of the day. It was cool enough that I didn’t feel too hot whilst running in the jacket and was a sensible choice for me as I didn’t get wet (legs aside) or feel too cold even when the pace slowed a bit in the second half.

I moved through Checkpoint 1 pretty quickly, grabbing a quick drink and a piece of cake and ran on. Having run the race before, I knew it was mainly cake/gels/jelly babies/bananas and the Checkpoints aside from the (sort of halfway) point at Streatley where there are a few more savoury items and I had elected to carry a few of own supplies so I could snack between Checkpoints.

Getting battered by the wind and rain

The rain eased off after Checkpoint 1 but then we suffered the full effects of the wind which was straight into the face between here and Checkpoint 2, there were a few times where it felt like I was really struggling against the wind and a few negative thoughts started to creep in.

Having run a race so many times can be a help and a hinderance. It’s nice to have that comfort over the event knowing the setup, logistics and route very well but the old adage that “familiarity breeds contempt” definitely applies to the usual muddy sections! I did question why I keep doing the same event and then gently reminded myself about the unbroken streak.

I ran along with Frank Womelsdorf for a few miles and we spoke a bit but the wind was so strong that I was struggling to hear him properly unless I turned to face him whilst he was speaking.

I once again didn’t tarry at the second Checkpoint in Benson. I grabbed a drink and a bit of cake (again) and moved on. The rain had eased off but it was still windy although as the river follows a meandering route the direction of the wind changed but it never seemed to be in our favour so far. I ran a few miles with Darren Clark as we made our way to the Streatley Checkpoint where I had a drink, grabbed a few savoury snacks and spent a couple of minutes walking over the bridge and back onto the footpath which gave me time to eat my handful of food.

A “clean” part of the course

The condition of the path was along the Whitchurch section was pretty good and I ran along this section by myself just behind Charmaine who was slightly ahead. My familiarity with this route meant I caught her up when she paused to check her directions and we tagged along together for a little while over Whitchurch Bridge, through the fields (which weren’t too muddy) and on towards Checkpoint 4 at Mapledurham.

I paused to have a drink, eat a banana and have one of my bottles refilled and walked up the small hill before settling into a trot again. I was started to run a little low on energy and was experiencing that ‘empty pit of the stomach feeling’. I also think I sometimes drink too much during races (which then means lots of ‘comfort’ breaks) and today I just sipped on my bottles occasionally and drank half of the small bottles at each Checkpoint. I only had to refill one of my bottles once during the race and only paused a couple of times during the run so that worked ok but hydration can be very weather dependent.

I caught up with Charmaine again and a guy called James who was also from Reading funnily enough and we tagged along together following the Thames Promenade section over the surfaced path through Reading. The wind started to become a bit more favourable blowing us towards Henley which was a bit of a relief.

We ‘trotted’ (see what I did there?) along this section until I felt a little low on energy and slowed to walk for a few mins whilst I grabbed some of the remaining food out of my pack and ate this as I walked although it’s probably a fair observation to say I was mentally slacking off at this point as Charmaine and James continued on ahead.

I picked up the jogging and arrived at the final Checkpoint by Sonning Bridge and ate another banana. The next section after the bridge involves a few muddy miles before you come off the path at Shiplake and then a few roads before the last section along the path before the end. I ran/walked this last section, lacking a bit of energy and mental drive. I couldn’t see anyone ahead or behind me so little opportunity to use another person as motivation to catch them up (or stay ahead of someone).

On the home stretch in Henley

As I got through the muddy sections (and getting closer to the finish) I settled into a continuous jog as I got down to the last couple of miles. I plodded along the last section over the long bridges and onto the path by the park when the finish is located. This last section of path near the park used to seem a lot longer but within a few minutes I saw the bandstand and finish area and ran across the line finishing in 7.37.

My time was a little slower than last year (by 10 mins) but conditions felt a bit harder than usual (with the strong winds) so I was reasonably satisfied with the effort (despite flagging mentally a bit towards the last section!). The event had around 80 DNF’s on the day from around 300 starters which was one of the highest drop out rates for this event to my knowledge.

Thanks to Steve and the GoBeyond team for a well organised events. The marshalls were supportive, friendly and helpful as usual. I did mention to Steve that a Thames Trot in the summer would be a far more enjoyable run if he ever decided to organise a ‘bonus’ run one year. Having said that a muddy, sloppy run in February is what the Thames Trot is all about.

Congratulations to all those who made it to the finish, most people I spoke to felt it was a hard year. The winner Craig Holgate finished in 5.49 and there were some good results from our club runners and local runners with RJ Barry Miller finishing 4th in 6.44, (soon to be RJ?) Paul Beechey finished 9th in 7.06, RJ Alex Whearity finishing in 14th in 7.32, RJ Darren Clark 24th in 7.56 and RJ Wendy Shaw finishing in 27th in 7.59. Including my result (17th) that made 5 Reading Joggers in the Top 30 was a good result for the club. 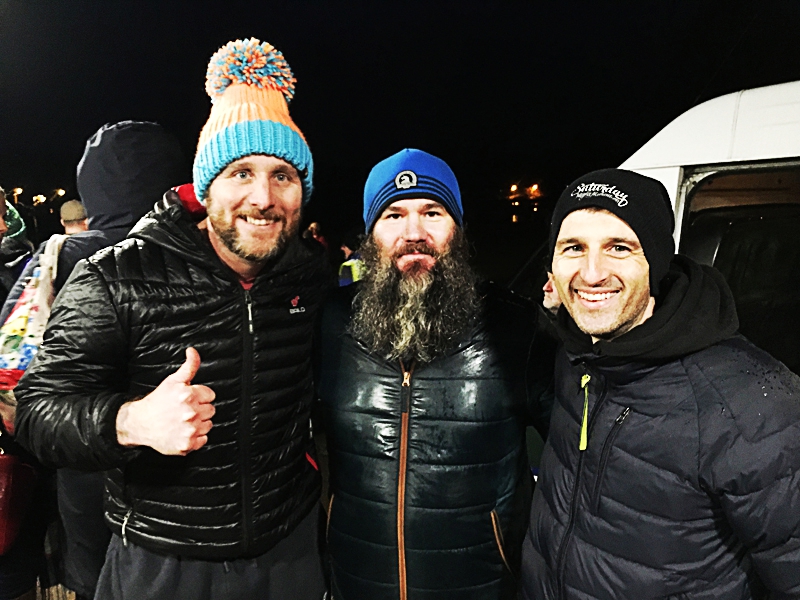 I waited around at the finish to support a few other runners coming in (plus Stouty was my lift option home!) and it was good to see Paul Stout, Jim Seaton and Sue van Huysteen all finishing. I did have a chance to catch up with Lindley who I hadn’t seen at the end who was crewing someone (see picture above). Finally, a quick thanks to Arthur the RJ’s coach who came out to support the runners all day on a wet and miserable day.

See you next year for Thames Trot number 9.