Well here we were once again at the Portsmouth Coastal Marathon. This was the third time I was participating and each time I had run it previously I swore I wouldn’t run it again.

Despite being a well organised event, I find the route a little dull, some parts very narrow, the weather was always wet and windy and it usually ended with me giving up at the turn and plodding back into the wind. However, the timing of the event is perfect.. a few days before Xmas and a great chance to have a pre-Xmas run and catch up with a few friends.

I headed down to Portsmouth very early in the morning with Alex Whearity and Shaun East from the Reading Joggers club and Paul Stout and caught up with a few people at the start (Mark Cockbain, Russ, Sandra, Fi, Matt Dunn and a few others).

Matt and I set out together and ran the first half which went quite quickly as we both dissected the recent Start Wars film (geek alert). The weather was typically over-cast and wet. This year also saw a 50k event with the runners starting our 45 minutes before hand so before the half-way point we started to encounter some traffic. We had both decided to run this at a steady but comfortable pace and settled into an 8m/m pace.

Alex and Shaun were both doing well as they passed me on their way back before I approached the turn point. It was around here that I lost Matt and headed back by myself giving a wave to a few faces I recognised on the way back (thanks to a couple of people who shouted at ‘The Hat’).

I was wearing ‘The Hat’ so it obviously started pouring down on the way back. This is where I normally get a bit disillusioned at Portsmouth as it’s a miserable return leg with the weather but I got my head down and made a bit of an effort (i.e. the pace was marginally quicker.. but not by much). I got a right old soaking around mile 20-21 with some torrential rain for a short period before it eased off.

Mile 23 was a little uncomfortable as I needed the loo but with there was some relief with public toilets at Mile 24 after a stomach clenching mile. The last 2 miles are back along the Pier into the wind but I just about managed to nip under 3.30 so an ok effort overall but nothing to shout about. 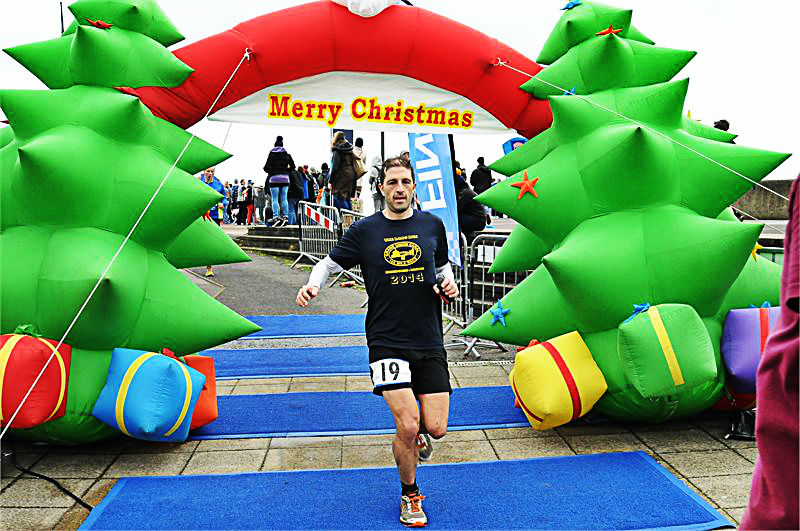 We then retired to the pub for a well earned Xmas lunch which was the best bit of the day for me with one more Marathon to go before the end of the year.