I had lined up a few Marathons over the Xmas period which were designed to be used as training runs, hopefully stave off some of the Xmas weight and also a chance to catch up with a few friends for a run and pub lunch after.

The first one was the Enigma Xmas Marathon (Day 2) and I drove up to the start on a wet morning to join about 50 other people who were going to run a few laps of Caldecotte Lake.

I hadn’t bothered tapering for the event as it was just a training run and it was going to be interesting to see how my legs felt after a few high mileage weeks (125 mpw for a few weeks). Time wise, I was still using a range of 3.15 good, 3.30 average and 3.45+ not so good.

It was the first time I had run the route in reverse and I hung with the pack (as Jonathon Godfrey streaked ahead) at the start as I wasn’t familiar with the mini-loop at the start which was a sensible move as one person ran in the wrong direction early on and was called back and then settled into a few laps with Jez Isaacs (again) who was completing two marathons in two days so after the half way point I gradually moved on having (relatively) fresher legs. 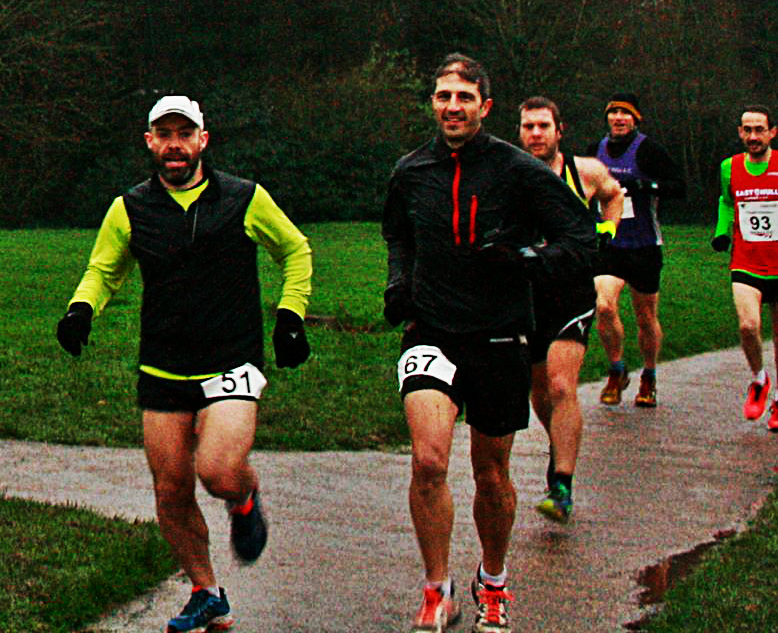 I spent a couple of laps chatting with Richard (I think) before I felt our pace slowing. Looking at the watch we were going to edge over the 3.30 mark having run the first half around 1.45 and so with a couple of laps to go (and having taking it pretty steady for the first half) I got my head down and started pounding out the last couple of laps. The weather was getting a bit worse as the rain started to pour down at points and I didn’t even have my hat.

I ran the second half in around 1.35, so a nice 10 minute negative split and put in my quickest miles for the last 5 miles (hovering just under the 7m/m mark) which was the quickest miles I had run in quite a while. Once again, the steady start helped with a stronger finish (all relative to my own pace of course).

I ended up finishing in 3.19 and then met up with Keith Godden for a bonus lap and a pub lunch after. Position wise I ended up in 2nd place (out of 44 finishers so a very small field) and well behind Jonathon which funnily enough was the same result as my first Marathon in 2015 at the Enigma New Years Marathon.

Thanks to Dave Bayley/Karen Webber for putting on the event, looking forward to the Rocky Double next September.

Photos thanks to Sara Morrow.