It’s the start of February and once again I’m standing on the start line of the Thames Trot event for my annual pre-season fitness test. This event has now become a bit of a tradition for me having attended every one since formation of the race in 2009. Over the past seven years the race has seen snow, ice, flooding and various diversions.

This year promised to be the year of mud although I was pleased to be running the original course once again after two years of diversions onto roads which I didn’t really enjoy as much to be honest.

My training really started at the end of December with a couple of marathons after a little bit of downtime to rest the knees and I’ve put in some solid mileage in January and was hoping to get near my PB for the course (which was just over 8hrs) and that was the year I ran it in fancy dress.. which didn’t quite seem right.

The start of the event was moved to Hawkwell Hotel next to the old start point which was a smart move as the Prince of Wales Pub was getting a little too small for the number of people taking part. I bumped into a few people at the start (cue obligatory selfie below) and stood on the start line ready to make a dash to the first lock where there’s usually a little bit of a bottlebeck.

We started promptly at 8.30am and I charged out in a second group of runners behind the lead group who soon disappeared into the distance. I ran the first few miles with Barry Miller and Tremayne Cowdry before Barry powered on ahead (and finished 13th in the end, great run mate!). The pace was a little fresh at the start as we were clocking some 7.30 m/m for the first 5 miles. The cold weather meant the ground was still reasonably firm early on and Tremayne and I ran the first half of the route together catching up on the usual running chat and banter.

I didn’t pause long at the first Checkpoint, just grabbed some water and a bit of cake and then carried on. A few people passed us during during the first half of the race and it was good to catch up and run a few miles with Karen Hathaway and Fiona Ross before they both moved on ahead and after a little while it was back to just Tremayne and I. We bumped into volunteering stalwarts Claire & Drew at Checkpoint 2 and said hello before grabbing a quick drink and snack and carrying on.

Some of the course was pretty muddy in places and was only going to get worse with 300+ people trampling through during the day. The muddy sections were a bit of a tedious slog and whilst I love my Inov8 Race Ultras they are terrible in the mud and I was slip-sliding all over the place at times. I’m not sure if there was an ideal shoe choice today as my shoes were fine for 80% of the course but not the muddy 20%. I could have worn something with more grip but they would probably not have given me the comfort over the road and path sections. I ended up marching some of these sections as I found it difficult to run on this surface.

There was one moment just before we left the Thames Path at Moulsford where I nearly lost a shoe when it got stuck in the mud but I managed to wriggle my foot free of the thick mud. I arrived at CP3 in Streatley (28 miles) in about 3.51 which was well ahead of my previous best time but was definitely lacking some energy and so I grabbed some food and drink and walked half a mile and consumed some food. As I was walking over Streatley Bridge a kind pedestrian commented to me that “everyone else was running”.. thanks! Tremayne went on ahead here and eventually finished 21st in a time of 7.15 (well done).

I settled back into a plod as Sally Ford caught up with me although once again I started to slip and slide around in the muddy field section just after CP3. Those five miles after CP3 were a struggle to be honest. I was lacking energy and needed my second wind. It wasn’t unexpected as I’ve not run a training run longer than 20 miles and haven’t yet built that deeper endurance fitness. In fairness my mind probably wasn’t on the race either and I started to think about the finish way too early, then had the little mental wobble when I considered just running marathons as I would have been finished by now before eventually talking myself into running a bit more before convincing myself this is the challenge you’ve set yourself and you’ve just got to work through it.

I put the iPod on to distract my mind and plodded the CP3 to CP4 section which was probably my slowest section. Thankfully, CP4 at Mapledurham gets near home territory and I started to get a bit more of a shuffle on as I come off the river briefly before heading back onto the path and past my workplace.

I arrived at CP5 which Guy from GoBeyond was manning, had a quick drink and then plodded on. The next section from Sonning saw more tedious mud for a few miles which I was getting quite frustrated with. When I tried to run I was sliding from side to side and just decided to march through it as quickly as I could.

I was pretty much alone having hardly seen any other runners but with a few miles to go I spotted Sally Ford just ahead and we paired up for the last 2-3 miles. Sally was having a similar experience to me getting a little frustrated with the conditions and it was good to have a bit of company to keep each other going for the last couple of miles.

We ran the last couple of miles once again slipping over in some of the mud on the fields just before we crossed the last bridge and we finally reached the edge of the park and then spied the finish.

We ran in together in 26th position from 300+ starters (and 254 finishers) finishing in a time of 7.24 which was a 40 minute personal best for the course although I didn’t feel particularly elated just relieved to get the race over with. I know my mind wasn’t quite on it today and despite the great organisation from GoBeyond (which has got better and better each year with the bigger and better race infrastructure and more marshals and support) perhaps I’m a little Thames Trotted out after running the same race quite a number of times. 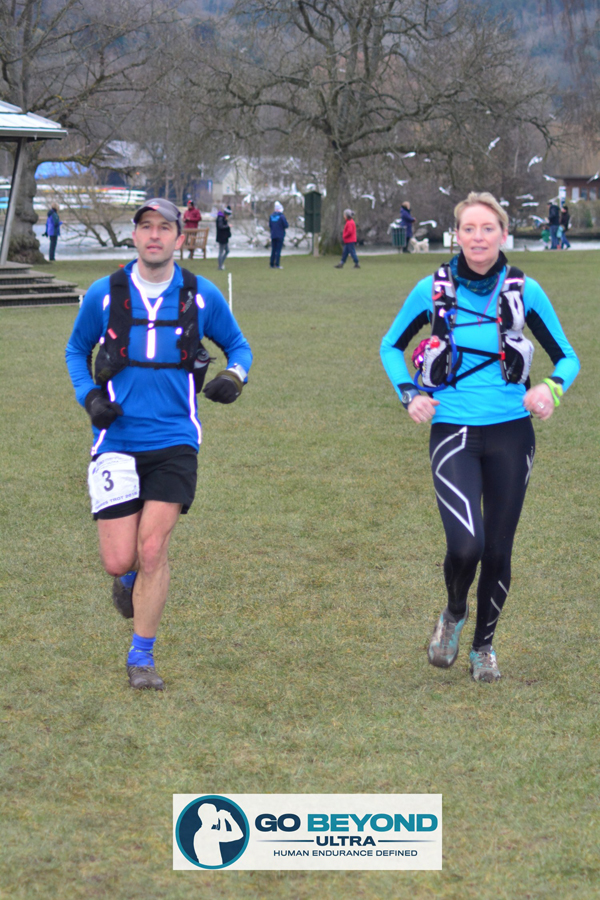 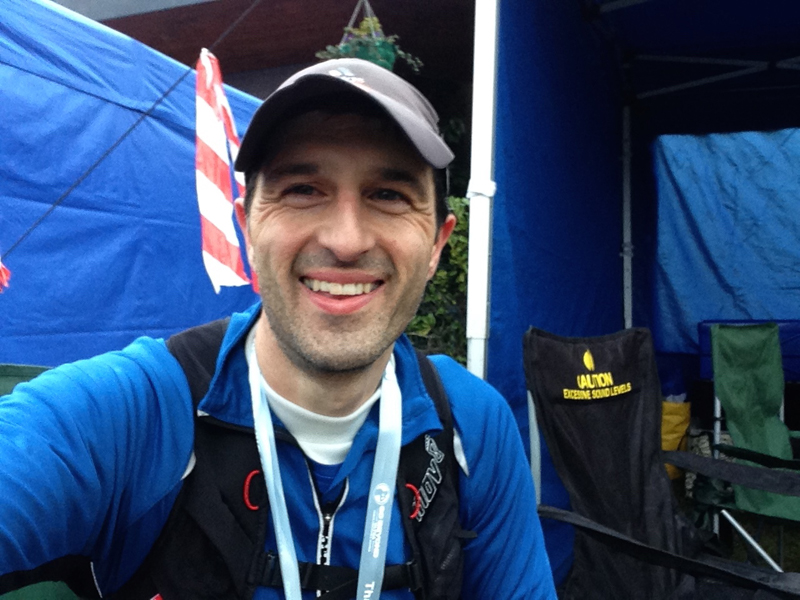 I got changed into some warm clothes and waited for other people to finish and managed to snap a few pictures of Stouty, Jim and Matt Dunn finishing who all finished within the next 45 mins or so. 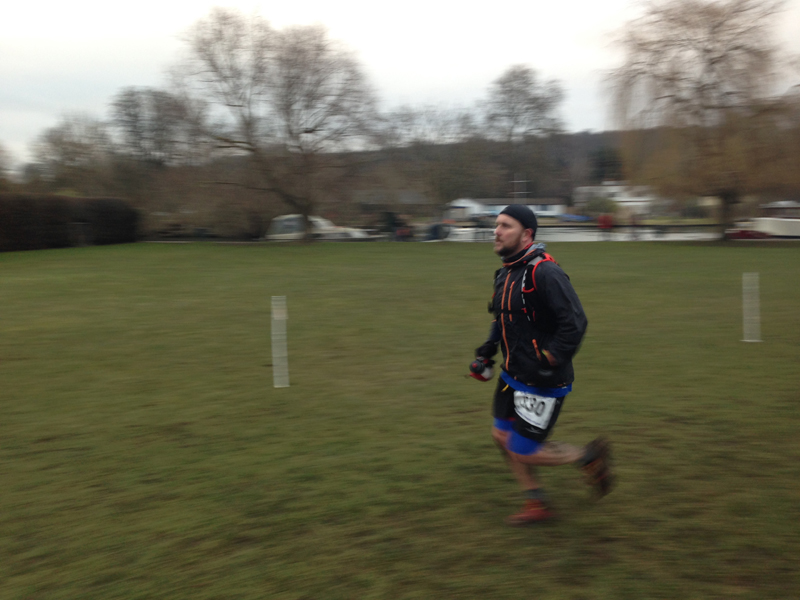 Matt was involved in a rather amusing sprint finish at the end (see picture below). Matt admitted he wasn’t having the best day but managed to summon a bit of energy to dash over the line at the end and win the sprint off.

Watching other people finishing, some running and some looking thoroughly miserable made me appreciate the fact that it wasn’t the easiest day with the conditions and upon reflection you shouldn’t ever be unhappy with a course PB. Perhaps I’m being a little harsh on myself here. It’s early in the year and the solid training has only started a few weeks ago so hopefully, I will be a little bit  more focussed when some of the bigger events take place in a few months time.

Despite the personal grumblings about the conditions and disappointment with fading a bit in the second half, it was a well organised event by Steve and the team at GoBeyond. I would love them to organise a summer version complete with BBQ at the end on a nice summers day that would make a great run and social event.

A final well done to my fellow Reading Joggers who took part in the event (Alex, Mike, Kate, Dave) and especially to Nick who was doing the Thames Trot for the first time. A quick thanks to those club members who came out and supported the guys on the course (especially Adrian and Ken who followed the race from start to finish).

The lure of an unbroken streak of races means I will probably enter again in 2016. See you there.