Team Covea (minus a few who missed the photo shoot)

Today was the day of the Reading Half Marathon and the 9th year in a row I have taken part in the event as my local town run.

To be honest I wasn’t really looking forward to the event at first with the typical big city (sorry Town as we aren’t allowed City status yet) logistics of travel, parking, lots of people, lots of shuffling around and lots of queues.

We arrived early as Sal & Annabelle were running the Green Park Challenge before hand along with a number of parents (and a teacher) from school. It was great to see some of the kids get involved in the event and as the girls made their way to the start I sat in the stadium to watch them finish.

It did bring a smile to my face as I eventually spotted my Sal and Annabelle enter the stadium and then Annabelle suddenly got a little competitive and started charging for the finish line, dodging bodies in front of her and leaving Mummy trailing behind!

I then made my way to meet them and also to meet up with a number of my work colleagues who were also running the event for charity, fitness or just fun. Once again, we looked pretty good in our nifty Team Covea Hoodies/Technical Tops as you can see below. 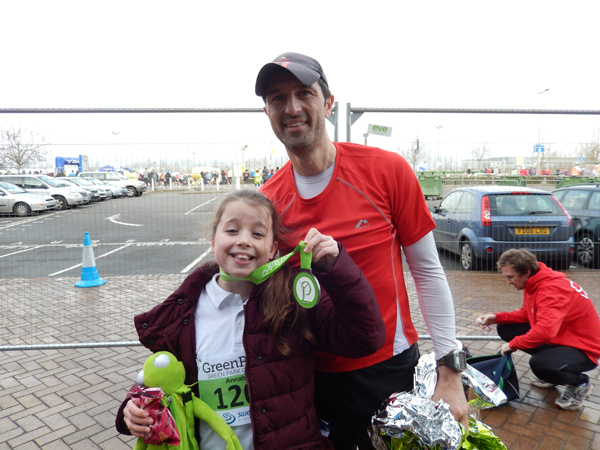 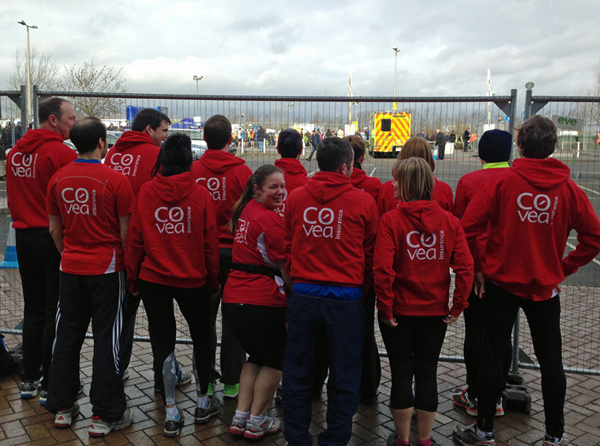 I then made my way with thousands of others to the start line which seemed to take an age. It was good to see that they had made more of an effort to segregate the runners with different zones based on your predicted finish time. One of my grumbles last year were people standing way in front of their likely goal times and holding everyone else back and this seemed to be less of an issue this year.

The start appeared to be slightly delayed as I stood around with a few of the guys from the Reading Joggers chatting briefly but a little while after 10.15am we were off.

It was once again a pretty busy event and to be honest, it felt busy all the way round. My fitness/training hasn’t quite been up to scratch so far this year with (insert excuse here) recovering from a knee injury and a bad case of man-flu in Feb so I didn’t think I would be going sub 1.30 but was expecting 1.35.

The first mile was congested as the crowds of runners started dashing forward and all I could think off was I could do with some space here. I was running behind Spiderman at first who was quite rightly getting lots of cheers and I was immediately regretting my decision not to run in fancy dress even though it was supposed to be fancy dress year as I usually alternate between the two for a laugh (probably attention seeking/superhero fetish in reality).  In fact, I decided then and there that I was going to run every single Reading Half in the future in fancy dress as I didn’t enjoy all this charging around in crowded roadways, I just wanted to run for a fun and have a laugh.

There’s a hill quite early on between miles 1-2 and I tested how the hill reps were going by giving it some effort as I passed loads of people up the hill which felt pretty good before getting my breath back on the flat and heading towards the University. There were a few people puffing and panting around me and I was thinking some people appear to be going out too hard if they are breathing heavily at this stage. I’ve never done that before….

The next few miles were pretty good through the University, grabbing a bag of water which I still haven’t worked out how I should open it and I just bit into the bag and swallowed the water from the hole. As I progressed towards the town centre the miles were ticking by quite quickly and the pace felt comfortable and wasn’t too shabby for me (7.26, 7.10, 7.11, 6.51, 6.55, 6.45) as I got the the halfway point in Reading town centre.

There were lots of people out supporting which was good to see and I carried on through the town towards the other hill at Russell Street. I put the hill rep training to good use as I pushed a bit up here overtaking a few runners before again catching my breath at the top and making my way towards Prospect Park.

Unfortunately, I failed to spot Sal & Annabelle here (there were too many people around) but Sal did grab a photo of me as I ran past.

I then followed the road left and headed towards the A33 and the long road to the Madjeski Stadium. The mile pace was pretty consistent (7.05, 7.05, 7.03) and I felt ok. I may have been running a little within myself possibly but it felt like I was giving it a little bit of an effort but at a pace I could run and hold a conversation at the same time.

I followed the trail of runners as we headed onto the A33 and felt the wind blow against us. I tried to settle in behind a group of runners to use them as a wind break but just drifted ahead of them. The pace was still pretty consistent (6.59, 7.09, 7.08) as I rounded the turn into Green Park as you are sent away from the stadium for a mile. This part of the race is usually a pain as you are close but not close enough but I just focussed on the runners coming the other way (ahead of me) and kept looking out for anyone I know and gave a random Fetchie shout to someone where a Fetcheveryone top. I got to the turn on the roundabout and headed back, less then a mile to go and tried to spot anyone I knew coming the other way (behind me) and I did manage to spot a work colleague (Chris) behind me who looked like he was having a really good run.

After coming out of Green Park there was around 800m to go as you approached the Stadium. The crowd and music support here was good as the runners were making their last charge for the line. We ran around the side of the stadium before entering and making a sprint along half of the football pitch. I crossed the line in 1.33.07 which I was reasonably satisfied with. The run had actually felt pretty comfortable throughout so maybe I could have trimmed off another minute or two but it probably would have hurt!

There was a small congregation of Reading Joggers at the finish and I spoke to a couple of the guys before heading out to my collect medal, goody bag, space blanket and kit. Oh, the kit. That was a nightmare, it took over 30 mins queueing to get my bag. From what I could tell someone had the genius idea of allocating the numbers in blocks based on your predicted finish time as a lot of the guys (and girls) around me all had similar numbers.

This would have been fine but the baggage tents were also organised by blocks of numbers meaning everyone who finished together all headed to the same tent. Whilst other tents were pretty much empty until they all started arriving together. I hope this can be improved next year as it was absolutely fine last year when I finished (albeit a couple of minutes quicker) strolled up, collected my bag in about 30 seconds.

I’ve forgotten to add the finishing medal was fantastic, a definite step up from previous years.

My plan had been to go back along the course and support some of my work colleagues but I unfortunately missed quite a few of them in view of the delay but I did see a few at the end and a few Reading Joggers as I jogged home along the reverse of the route to earn a bonus 10k run at the end.

It was also nice to see some people nearer the back of the field giving all their effort just to make it to the finish line. I spoke to one young lady who was struggling with a knee injury but was determined to finish as she was running for charity so I jogged along with her and chatted for a little while and have no doubt that she made it in the end. It’s feels to good to support people at races and I’m sure the runners were appreciative of the support at all points in the race.

A final shout out to Arthur Abbot (Reading Joggers coach) who once again kept his streak going of completing every single Reading Half Marathon event (31-32 years I believe).

So overall, it wasn’t a bad run at all. The run felt pretty comfortable so training can be resumed pretty quickly (tomorrow) and it was good to see lots of people out running and supporting from the school kids, parents, fellow club runners and work colleagues and I ended up enjoying it more than I thought I would at the start. I should add thanks to everyone who gave me a shout out around the course.

Tomorrow’s conversation in the coffee room will be dominated by “How did everyone get on in the Reading Half” and it’s good to be a part of a local running event. So next year will be my 10th Reading in a row. I may have to think up a super exciting and completely over the top fancy dress idea to make up for missing this year! (How do we top the Batmobile?)

One Response to “2014 Reading Half Marathon”