Two days to go before the 2013 Grand Union Canal Run (GUCR) and its time for the usual pre-race blog which an event this size deserves.

There are a number of reasons I like writing a pre-event blog which includes:

I first ran (walked) the GUCR in 2010 at a time when I was a complete ultra running novice and scraped a finish in a less than impressive time of 43-44 hours. I returned in 2011 with a slightly improved performance and finished in 38-39 hours still feeling that I could have done a bit better.

Fast forward to 2013 and I’m back again to try and better previous performances. With the Spartathlon as the key goal for this year there is an even greater focus on an improved finishing time. I was comfortable to take any sort of finish in 2010, I was aiming for a sub 40 in 2011 and in 2013 I am now looking for a 32-34hr finish to put me on target for Spartathlon cut-offs.

So, What Has Changed?

A reasonable question and one I need to provide a convincing answer for if I’m to get anywhere near my goal. I often hear (and have said it myself a few times).. “I finished x race in y hours but I think I could do it in z (fewer) hours”.

Whilst it’s good to have a target and a challenge, race results/times don’t lie and you are only as a good as you have proven in the past. My GUCR time of 38-39 hrs is not good enough for the Spartathlon at present. However if I can get this to a 32-34hr then maybe I have a chance at this event. 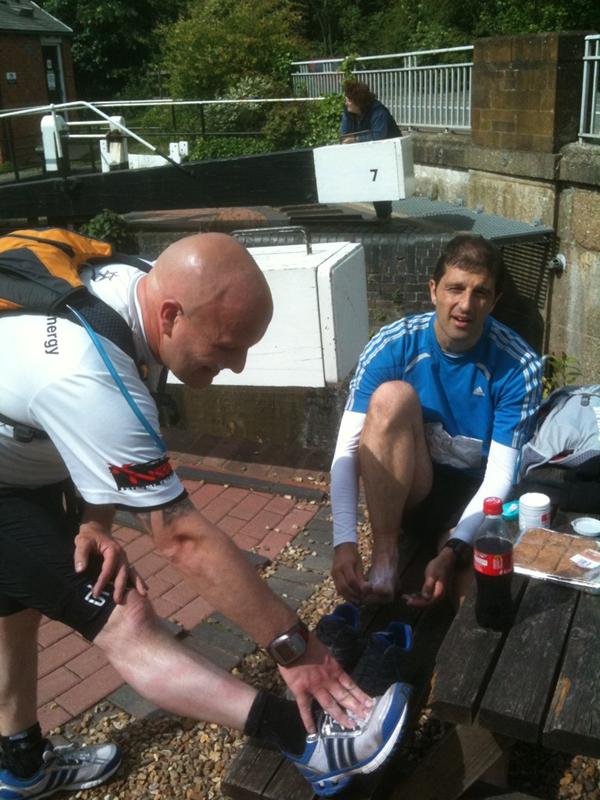 So how can I improve upon my last performance?

My training for the 2013 has been pretty good overall. I’ve run more miles than I have done before, tried (but not completely successfulyl) to avoid simply plodding miles and mixing it up with the odd different session and I have seen some improvements in race times. The following table gives a quick summary of 2011 vs. 2013 where I have followed a similar build up of races.

Not the most impressive times for some of the Ultra Marathon speedsters out there but it definitely shows signs of improvement.

A couple of areas to improve upon here are as follows:

This is normally a secret excel spreadsheet of distances, times and paces which I carry in my pocket but for those running or following the race I am aiming to achieve the following milestones:

The danger with stating these goals is that I may try and push earlier to be ahead of target and then everything unravels later on. If you see me anywhere near the front of the race at Checkpoint 1 then kindly remind me of this blog!

There are two parts of the race which I find the toughest:

I have to admit to carrying an injury for a little while. Some of you who may have read my previous blogs will have noted reference to a groin injury picked up at the Thames Trot in February. Unfortunately, I have been carrying this for 2-3 months despite it not impacting my running I could feel it most times I was running.

I finally decided to go to the Sports Physio for a sports-massage and an opinion and some work on the right calf muscle which was stiff and sore. The physio put me through various stretches which felt ok before commenting that she didn’t think it was a muscular injury and suggested it could be hernia related and I may wish to get a Doctors opinion. Not the news I wanted to hear at all and if this diagnosis proved true (not confirmed at this stage) then worst case scenario is an operation and my 2013 plans (GUCR, Thames Ring and Spartathlon) all wiped out.

However after some consideration, this was not impacting my running at all and I decided there was no reason not to run the GUCR. I would also rather try and keep a clean bill of health especially when looking to approach the GP for a medical consent form in September. I am hoping it is still just a groin strain which has taken a long time to heal up particularly as I haven’t rested it at all but at the moment I just need to put it out of my mind. If I can complete the GUCR then the Thames Ring and Spartathlon are still on unless anything gets worse.

So come 6am on Saturday morning I will be on the start line with 100 or so other runners. The reality of the race is that 50% of the starters will not finish. Personally, (barring an injury) I feel pretty confident of a finish and confident of bettering my 2011 time.

However, achieving a target of 32-34 hours is going to be a challenge. You can keep up to speed on my progress via my @ultraavon twitter feed over the weekend.

Hopefully, I’ve added enough pressure on myself with the blog and a weight of expectation from the handful of people who read this to keep me moving over the weekend. We will see, full report in a few days time.