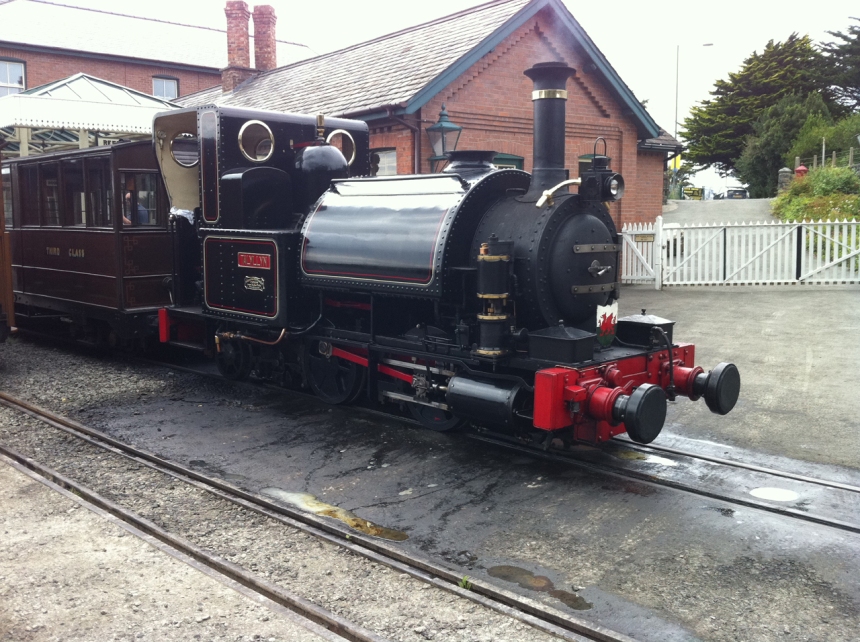 I travelled up to Wales this last weekend with the family to take part in the 28th Annual Race the Train event in Tywyn, Wales.
The event is a multi-terrain run where competitors attempt to complete a 14 mile mainly off-road run against an old steam train which follows the runners from Tywyn Station to Abergynolwn and back.
The runners will cover a mixture of road (start and end) and then paths, lanes, tracks and agricultural land on an outward 7 mile leg before turning and taking a similar  (although slightly more difficult) route back. The train track runs close to the runners and sometimes right next to them.
We travelled up on the Friday having decided to make a weekend of it and went to the race registration to collect the spectator train tickets (wife and daughter had come to watch and support).
We then visited the small train station with the steam train and I had my first face to face with the train. I hadn’t taken part in the event before and had visions of a huge grand old steam train packed with hundreds of people following a full sized rail track alongside some gorgeous scenic landscapes and rolling hills and a lovely bright summers day.
Well, I must admit I was slightly disappointed that the train wasn’t as big as I had expected and the railway station and track was not quite as grand as I expected and the gorgeous scenic landscape was going to be wet, muddy and boggy but we’ll come on to that later. 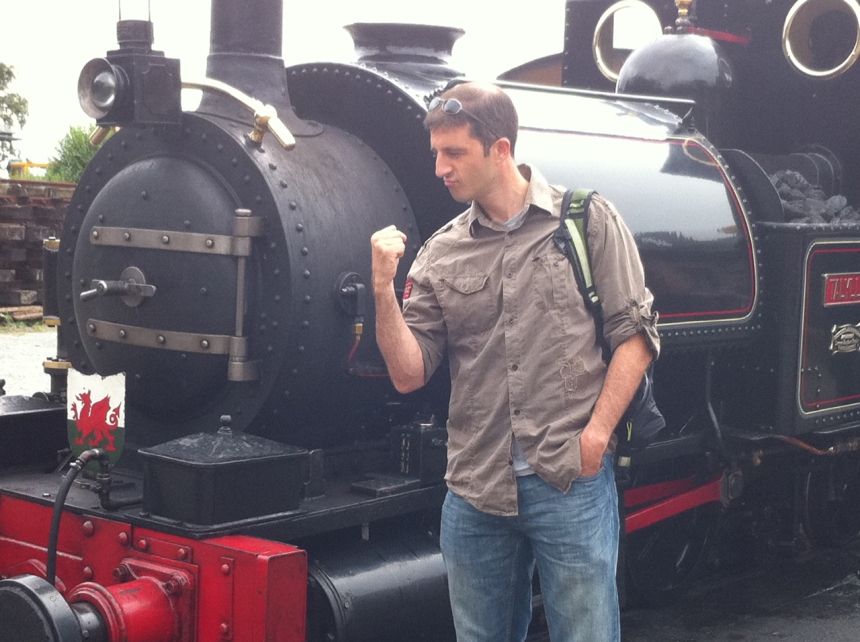 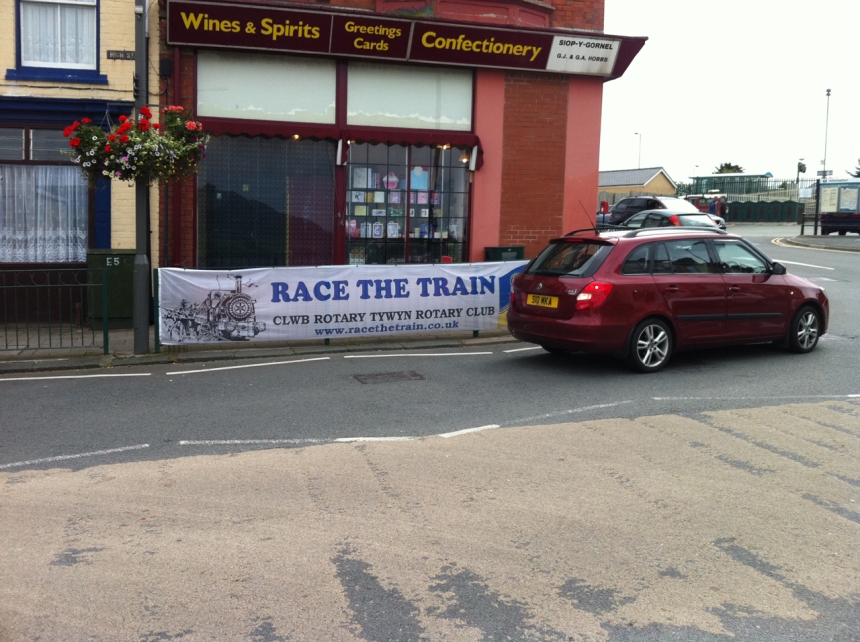 We returned mid-morning the next day to rain, plenty of rain. As we drove into Tywyn, the 10k event was underway and we witnessed soaked, filthy muddy runners running back into the town. This didn’t bode too well for the run.
This event must be a major highlight in the town as there were plenty of banners and posters upon display in shops around the area. The major road through the town was closed for the run as this would be the start and finish of the run itself and despite the downpour there were plenty of spectators, marshals and supporters out.
I left the girls to board the train and waited on the bridge overlooking the station and took a few snaps and tasted the acrid smell of the steam coming from the train.

The train was expected to take 1hr 45mins and the course was 14 miles. However, accounting for the varied train it had been suggested that an accurate assessment of your time would be your Half Marathon time plus 25 mins, making mine around 2 hours. So the pre-race prediction was a 15 minute win for the train which pleased daughter no end. As a passenger on the train, she really wanted a train win! 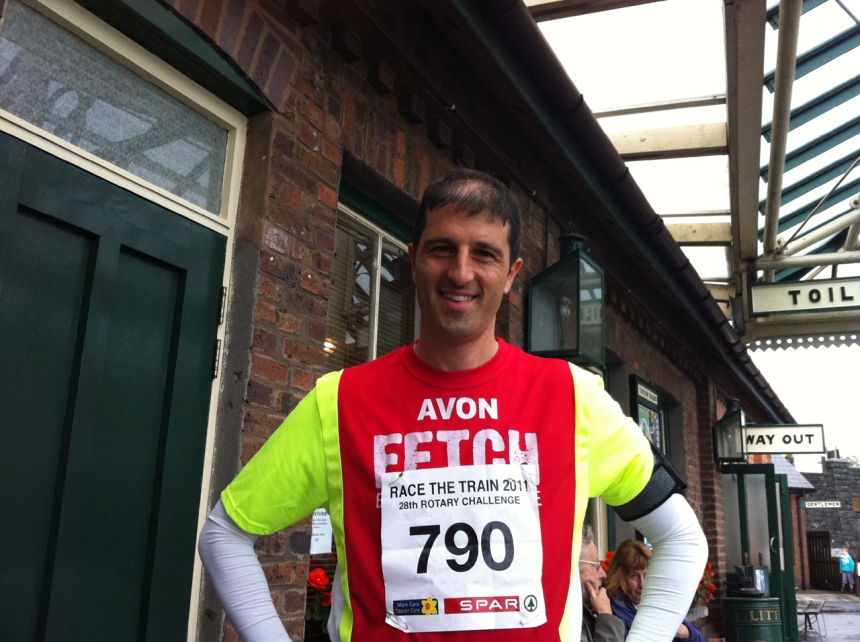 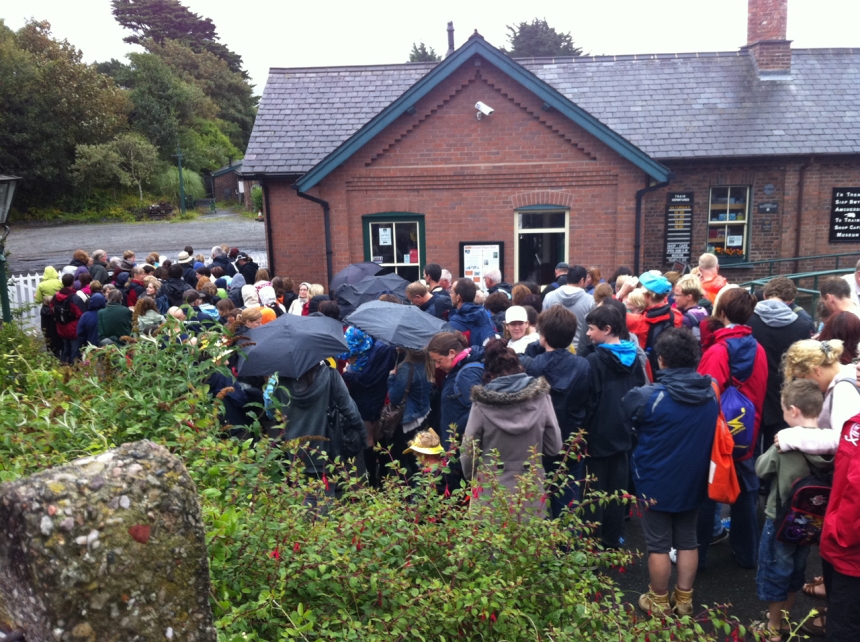 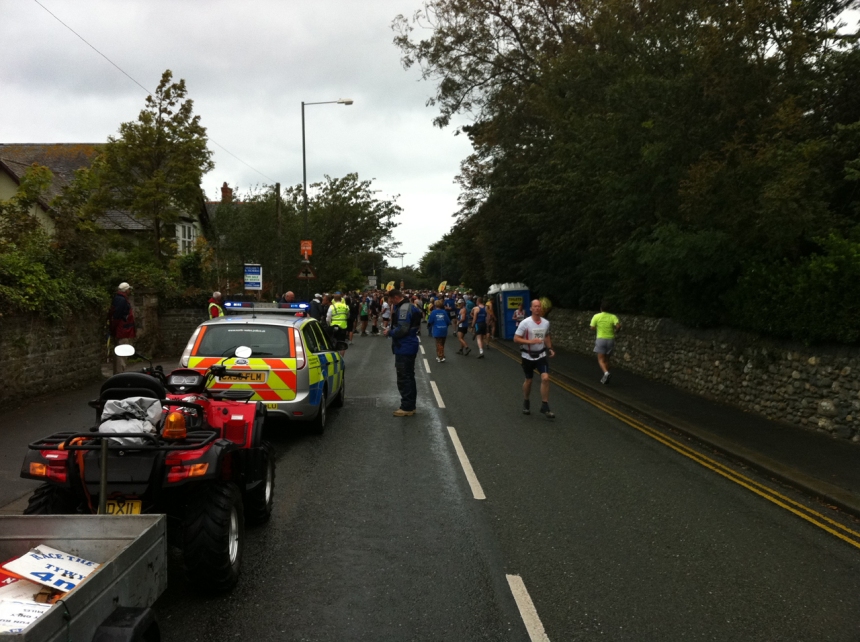 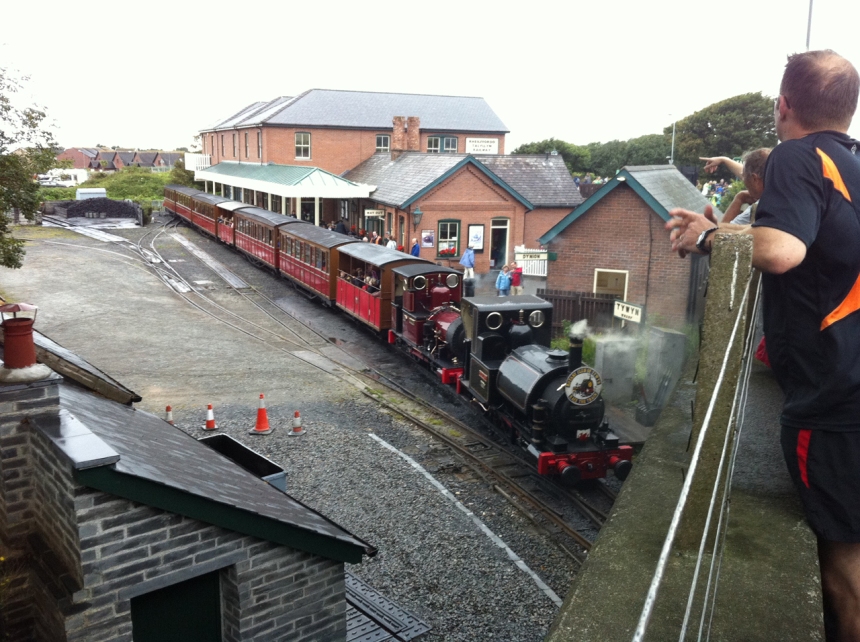 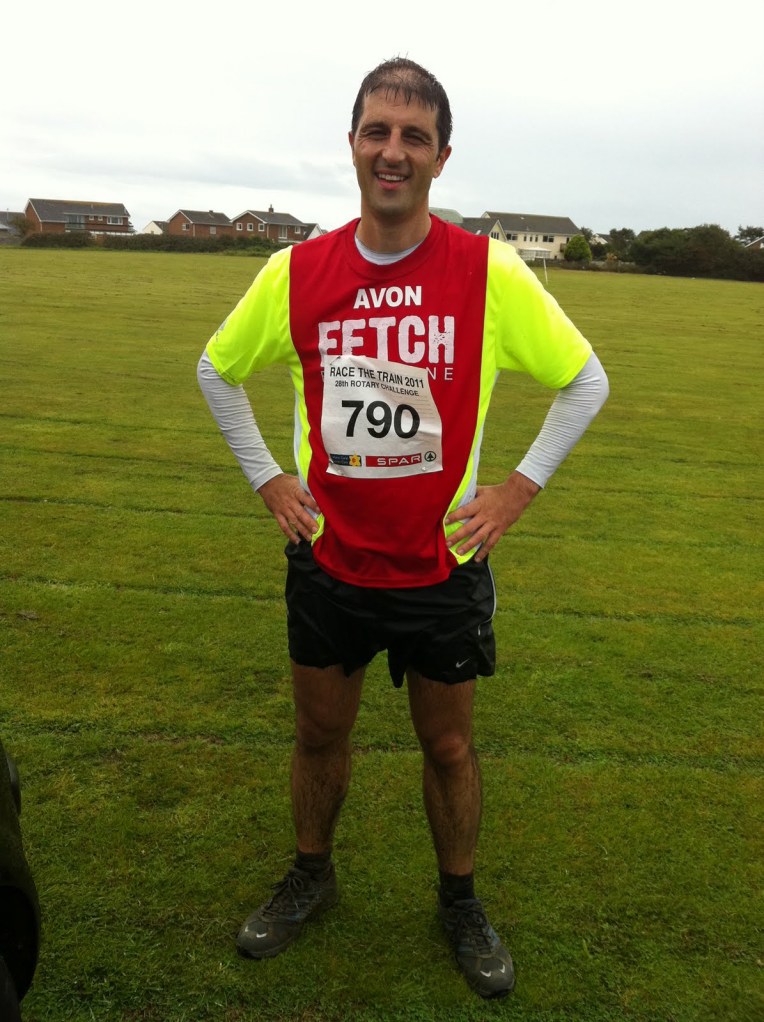 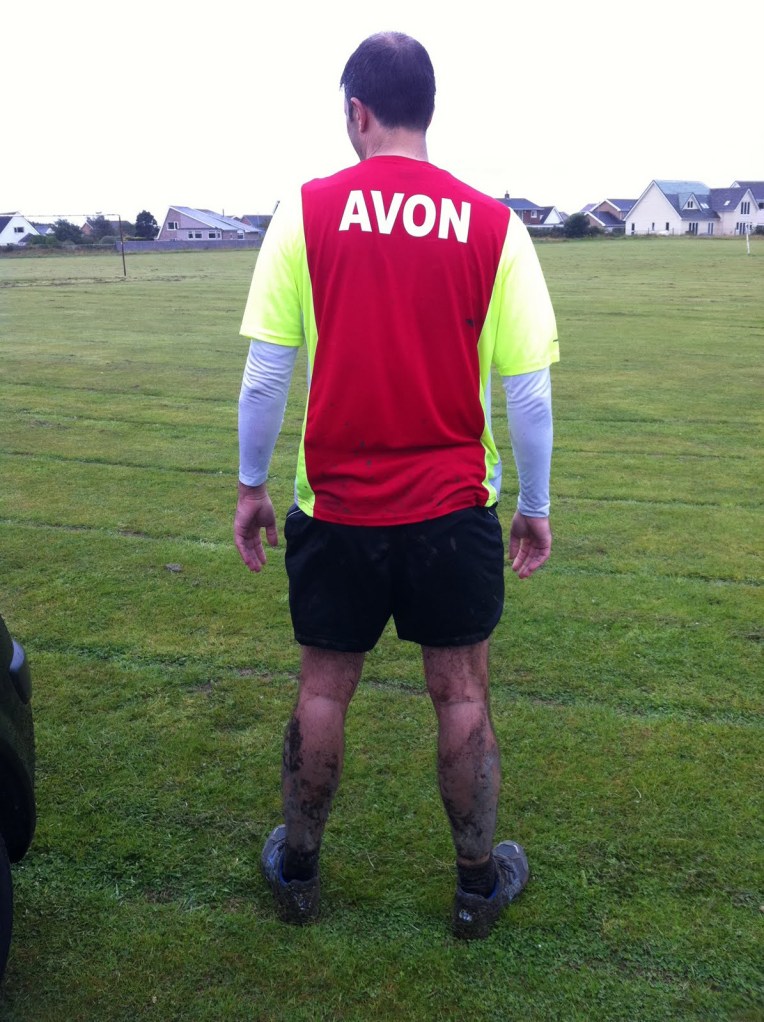 We exited the lane and onto the road only a mile or so to go. I ran through the outskirts of Tywyn heading to the finish line and then as we turned the corner I saw the glimpse of the finish line and clock which read 1.59 something. My pre-race prediction was 2 hrs and suddenly I put in a bit of a spurt for the last 50-100 yards to finish in 1.59.30 (although my chip time was 1.59.07) and got a few cheers for my effort at the end (the crowd always loves the sprint finish).
Sal and Annabelle had already arrived at the station on the train in 1.47.48 and had made the short walk to see me at the end, so they had finished comfortably ahead of me but this did give Sal the opportunity to video my sprint finish.
I picked up the train shaped medal and goody bag which included a really good T-Shirt (good quality with a decent logo in the style of a “SuperDry” T-Shirt with the curly writing) and we walked back to the car where I had a shower and got changed. The shower had reminded me of the old football days where there were too many bodies, not enough water pressure to work all the showers at once so the water came out in a dribble and it was scalding hot. I did my best to wash the dirt and grit off myself before we headed back to watch a few other finishers before getting some well deserved fish and chips.
The girls had enjoyed the train ride and the time had flown by for them but they did pack a lot of people onto the train so it wasn’t the most comfortable of rides.
The support on the race by the marshals and locals was excellent, the town really made an effort despite the pretty miserable conditions. It was a real shame that the weather was so poor as bright, warm sunny conditions would have got more people out and made a good event even better.
So final result was a 11 min 19 second win for the train which was a little closer than I had thought. With better conditions, I think I could certainly get closer to the train finish time but I would need a minute a mile improvement in not ideal running conditions which may be slightly out of reach to be fair.
It was a good event overall and a good family day out/weekend away and well organised by the locals. It was also good to see everyone wearing their T-Shirts after the race as I spotted them several times in different places (Motorway Service stations etc on my way home.

So congratulations Mr Train sir, you ran a fine race. 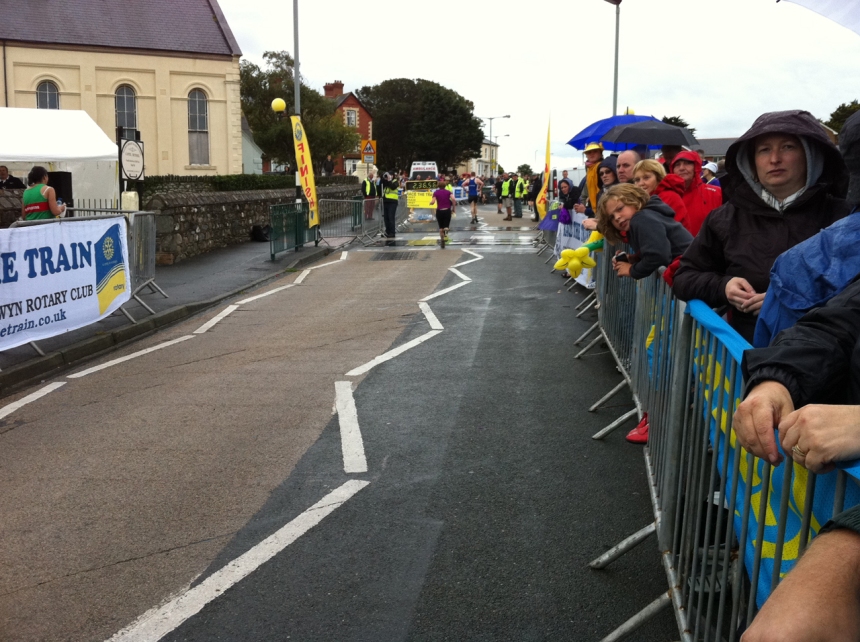