I took part in the Reading Half Marathon today with fellow runners Matt (Fetch: Cogs1), Stouty (Fetch: Stouty), Carl (Fetch: Jackal) and Ross. For Matt and I, this was our 6th year in a row for the local event.

We arrived at the Madjeski Stadium at around 9am to find the place busy with with up to 18,000 runners getting ready for one of the larger Half Marathons in the UK. The weather was perfect with cool but not too cold temparatures as we made our way down to the start line at Green Park.

For some reason, the runners were funnelled down the Green Park road causing delays getting to the right start position with the volume of people making their way to the start but we managed to get to our appropriate start zone with a few minutes to go before the race was due to start at 10.05am.

The race started on time and we set off. I had been aiming to match my Wokingham Half time of 1.35 whilst Matt was aiming for a new PB of 1.32, so we decided to run together for the first few miles. My only concern was the volume of runners on the road may hamper your ability to run at your preferred pace as this was realised quite early on as quite a number of other runners simply placed themselves on the start grid for times they had no realistic chance of achieving. 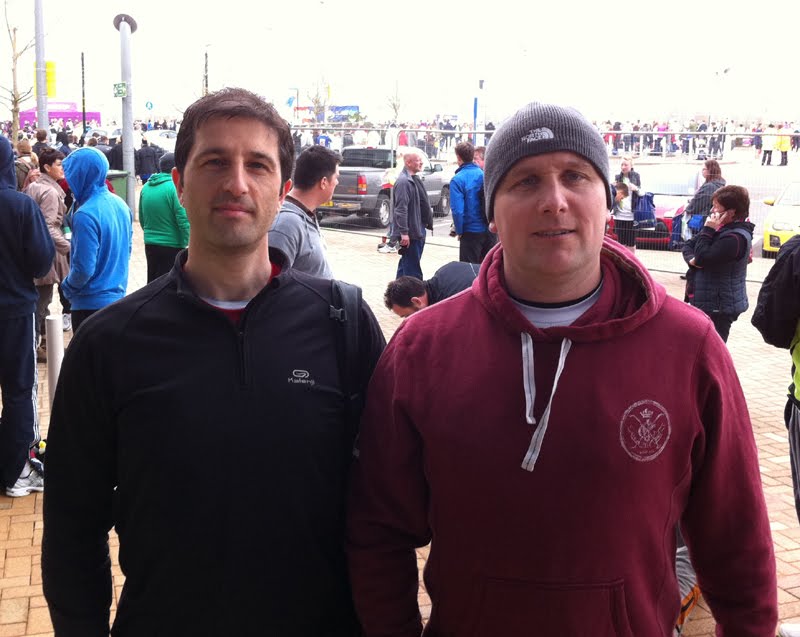 The first half a mile involved lots of bumping and dodging taking place all around us caused primarily by other inconsiderate runners. Whilst, it’s great that many people are taking part, they should be realistic in their expectations and observe the starting zones. I had to dodge around a couple of girls doing over 10 min/mile pace for the first half a mile who had started in the front of the red zone (1.26 – 1.45)! Right, mini rant over.

After the first couple of miles and the first hill, the pacing settled down to more comfortable levels and Matt and I were settling into a rhythm. The mile splits for the first 4 miles were 7.12, 6.45, 7.14, 6.59 which was on target although a little quicker than I’m used to on my long slow Ultra’s! Matt edged on ahead and I lost sight of him after the run passed through Reading University as I continued on.

The next part of the run took us near the Royal Berkshire Hospital, under the IDR (with the band playing) and into the town centre. The crowd support was really good this year with thousands of people all around the course cheering all the competitors and several bands around the course giving the run a festival type atmosphere. My next 4 mile splits were 6.59, 6.58, 6.44 and 7.12 although I was starting to feel the pace a bit and wasn’t quite feeling comfortable on the run. I’d managed splits of around 7.20 at Wokingham fairly consistently so was on target for a good time (for me) if I could keep it going. I do recall passing the 10k mark at just over 42 mins and thinking my current 10k PB of 44.30 ‘ish is definitely going to fall this year probably at the Woodley 10k.

There was also an amusing moment as the crowd of runners headed under the IDR, in the middle of all the runners was a coloured gentleman of middle to advancing years idly riding his bike in the middle of all the runners totally oblivious to what was going on around him although he was annoying several runners as he was cycling at a very pedestrian pace.

As the run headed through Friar Street and onto the Oxford Road up to the Russell Street hill, I took an energy gel and made a conscious effort to ease the pace a bit so I could feel a bit more relaxed. The next few mile splits were 7.20, 7.14, 7.0 as I passed Prospect Park and gave a wave to the wife and daughter who were supporting near Prospect Park and headed down the Bath Road.

I had spotted the 1.35 pacemaker who was doing a very encouraging job with other runenrs and tried to keep him insight as we entered the latter stages of the race. With 3.1 miles to go, I checked the Garmin and calculated (it kills some time mid-race you known) I was on for a personal best time if I could keep to under 8 min miles.

I tried to stop looking too far ahead down the long A33 towards the Madjeski Stadium by staring at the floor, saw the chap in the Mankini ahead of me and moved to his left to avoid being photographed as “the bloke who followed and stared at the Mankini” although to be fair he trotted on ahead of me anyway.

The last three mile splits were the slowest at 7.17, 7.24 and 7.16. As I headed down Green Park I saw Matt about 2 mins ahead of me after the turn and gave him an encouraging shout although he looked like how I was feeling as he entered his last mile. A brief thought passed through my mind about putting the foot down on the gas and trying to catch up but the body wouldn’t have been too pleased and I set my mind to working out my finishing time as I rounded the corner on the small hill towards the Madjeski Stadium.

As you near the Stadium, there was loads of support and you can hear the cheers of the crowd in the Stadium. This year I was determined to soak up the atmosphere so as I entered the Stadium I had a look around at all the crowds and sampled the wonderful finish and atmosphere, it really is a great finish to the race. 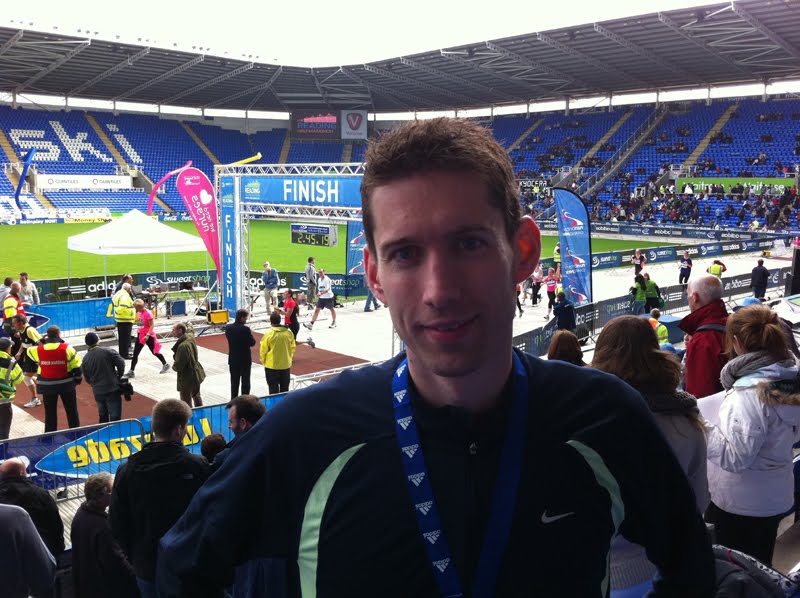 I glanced at my Garmin which was ticking through the 1.33 mark and put in the usual sprint burst (just to prove there’s something in the tank) at the end down the home straight to finish in 1.33.30 on my watch (chip times to be confirmed) and about 1.35 on the clock which was a new Personal Best by 2 minutes.

I saw Matt ahead as we exited the Stadium to collect our medals and he had finished in a new PB of 1.31.40 so we were both pretty pleased. We then enjoyed a message and warm down at the Adidas VIP suit and wandered into the Stadium to watch some of the other runners come in. Normally, once I’ve finished I’ll start to make my way home to avoid traffic but I thought I’d hang around and enjoy the event a bit more this year and I’m glad I did before I jogged the few miles home (yes, the Ultra training regime then kicks in).

Stouty finished just behind me in 1.37 which was another PB and the first time he’s gone below 1.40 so he was pleased with his finish. Carl came in at 1.45 and Ross came in just over 2 hours so not a bad effort all round.

For your £31-32 entry fee you got a medal, goody bag with mars bar, snack bars, water and lucozade. It’s an expensive Half Marathon to be honest but it boasts great support and a really good finish and the organisation is good with plenty of marshalls, support and supplies (water/lucozade). For us, it’s our local event and a no brainer really.

Overall, another successful local Half Marathon event organised and completed and some good results for the guys who took part today. 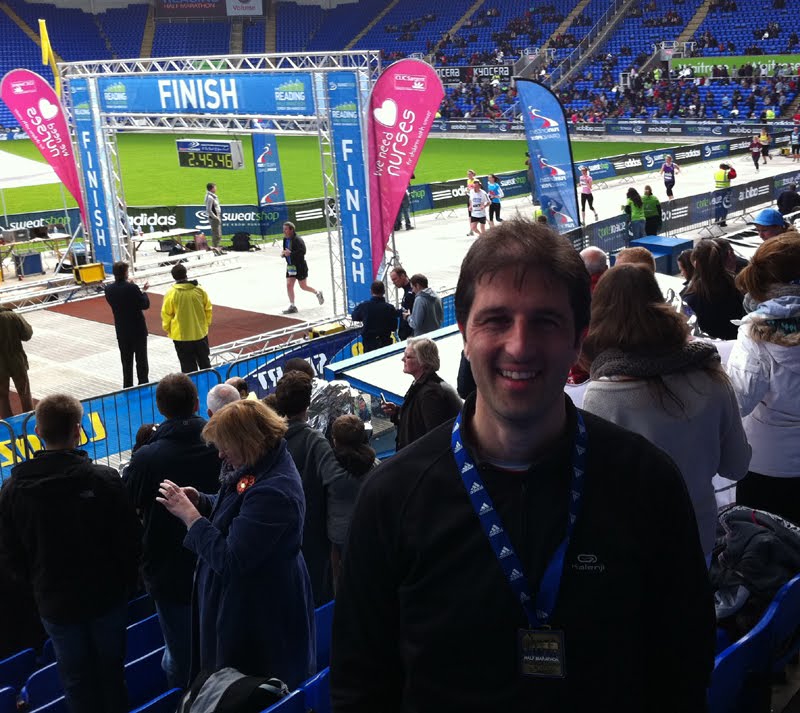 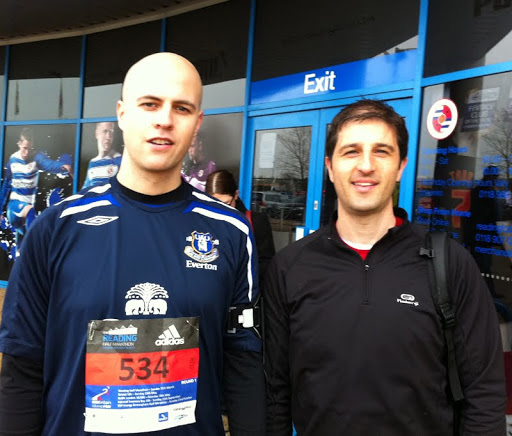